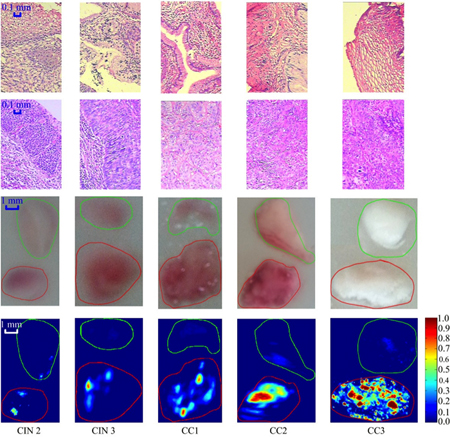 Comparison between the normal cervical tissue and tissue lesion for different stages.

Improving survival rates of cervical cancer patients is a great example of how successful the war on cancer can be. Since the advent of “Pap smear” screening, in 1927, U.S. cervical cancer deaths decreased dramatically, by more than 60% between 1955 and 1992.

Now a team of researchers at Central South University, based in Hunan, have demonstrated that photoacoustic imaging, already under investigation for detecting skin or breast cancers and for monitoring therapy, also offers the potential to become a new, faster, cheaper and non-invasive method to detect, diagnose and stage cervical cancer with high accuracy. Their work appears in Biomedical Optics Express.

“Our results show that the photoacoustic imaging may have great potential in the clinical diagnosis of cervical cancer,” said Jiaying Xiao, an assistant professor of biomedical engineering at Central South University, who led the research. “The technique is non-invasive and can detect the lesions in the cervical canal, an area that conventional methods fail to observe. The photoacoustic imaging can also evaluate the invasion depth of cervical lesions more effectively.”

According to Xiao, one of the conventional screening methods is colposcopy, a technique in which doctors to use a special magnifying device to examine the vulva, vagina and cervix and identify suspicious lesions, which are then biopsied. Although colposcopy is effective in detecting lesions around the external cervical orifice, and cervical biopsy is the best method for diagnosing cancer in the cervix, these conventional methods are both time- and labor-intensive – and expensive. Moreover, colposcopy may miss some cancer lesions.

Xiao explained, a considerable number of the cervical cancer cases start from lesions in the cervical canal, but the interior of cervical canal cannot be directly observed with colposcopy. Because of that, these lesions may not be detected until the cancer has advanced and spread to other tissues. “Thus, there is still a need to develop new diagnostic technologies with higher accuracy, deeper penetration, larger scanning regions, and lower cost for the routine tests of cervical cancer,” he said.

Photoacoustic imaging is a hybrid optical imaging technique that combines the high optical contrast of pure optical imaging with the high spatial resolution and the deep imaging depth of ultrasound. Short laser pulses irradiate biological tissues. Some of the laser energy is absorbed by the tissues and converted into heat, leading to rapid thermal expansion inside the tissues that produces ultrasonic waves. The generated waves are then detected by an ultrasonic sensor to form photoacoustic images of the tissues.

Xiao added, “Due to the higher hemoglobin concentration, abnormal angiogenesis has higher optical absorptions in certain wavelengths than normal tissues. If you irradiate a tissue with a short laser pulse, the part with abnormal angiogenesis will absorb more laser energy than the surrounding tissues and produce a different acoustical signature. Using ultrasound detectors, researchers can map these photoacoustic signals and identify the locations of lesions.”

The technique - in detail

In their latest paper, Xiao and his colleagues conducted 30 in vitro experiments with tissue samples representing different cancer stages. In each experiment, researchers embedded one piece of normal cervical tissue and one piece of cervical lesion from the same person in a cylindrical phantom for simultaneous photoacoustic imaging. Part of each sample was also sent to histological evaluation for cross-photoacoustic imaging.

By processing all of the photoacoustic imaging data with computer programs, scientists obtain a 2-D en-face photoacoustic image called a depth maximum amplitude projection image, which shows the optical absorption distribution or photoacoustic contrast of the sample. The image can help scientists identify the lesion location and evaluate different cancer stages of cervical cancer.

Compared with other cervical screening methods, Xiao added, photoacoustic imaging also has a much higher penetration depth by using ultrasound as the localizing signal, which is less scattered than light. Therefore, the optical absorption distribution can be obtained deep in the biological tissue.

While the work is preliminary, it provides solid experimental basis for future studies, showing for the first time that photoacoustic imaging has the potential to make better diagnoses and help save lives, Xiao said. The next step, he added, is to prove the applicability of photoacoustic imaging in tumor models and ultimately in patients.

“Our ultimate goal is to develop an endoscopic photoacoustic imaging probe scanning the cervical canal, which would be a quicker, cheaper and non-invasive method for the diagnosis of cervical cancer."