Going swimmingly: the waterproofed system goes through its paces in the pool.

Researchers at the University of Essex, UK, have devised a waterproofing technique to enable underwater near infrared measurements of changes in blood oxygenation of swimmers during training. The development could help improve understanding of the muscle oxygenation processes in swimming and other water-related sports, which the university is also planning to investigate.

The project led by Prof. Chris Cooper at the University’s School of Biological Sciences has established a new method of protecting the near-infrared spectrometer (a "PortaMon" developed by Artinis Medical Systems) to enable NIR measurement during swim exercises. The work is published in the Journal of Biomedical Optics.

Various materials were initially tested for waterproof suitability by comparing light intensity values during human tissue assessment experiments. For the measurements to be effective, the covering should not interfere with the relatively weak reflected signals. Cooper's team said, “Simply covering the device in a waterproof sheath prevents it from functioning properly. But modifying an optically clear, transparent, commercially-available silicone covering through the application of a bonded, thin, black PVC material, which is impermeable to NIR light transmission, produces an acceptable result.” 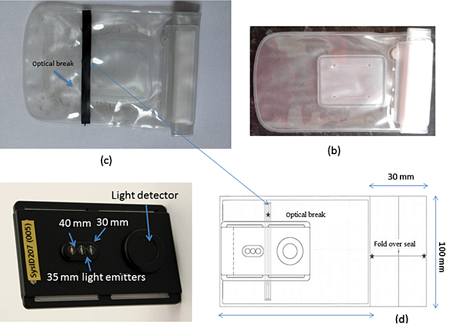 Testing the adapted system using Bland–Altman analysis indicated that measurements of exercise-induced changes in tissue saturation index (TSI) were within acceptable limits. Although water immersion had a small but significant effect upon NIR light intensity, this resulted in a negligible change in TSI.

Cooper worked on the development with Ben Jones, former England rugby player and now a PhD Student at the University of Essex, and Marco Dat, from Artinis Medical Systems, which is based in Elst, Netherlands.

He told optics.org, “Generally there has been less technical research into the training performance of swimmers because of the problems of monitoring muscle oxygenation underwater. We still have the problem of transmitting data wirelessly while the experiment is underway, which we can do with runners and cyclists. So with the swimmers we have to store the data on the device and collect it afterwards.

"The successful recording of the swimmer data was confirmed by observing the contrasting performance of a triathlete’s swim with that of a dedicated swimmer, which revealed that the kicking effort by the triathlete is lower because they try to save their legs for cycling phase of their event.”

Looking ahead to his group’s next likely project, Cooper added, “Now we have validated the waterproofing technology, we are looking forward to using near infrared light to probe the muscle oxygenation changes during elite swimming.

“We would like to see whether there are changes in oxygen delivery and extraction in different training situations. By this means, coaches could optimise training programs. In the field of recovery and rehabilitation the technique will also allow us to probe the effects - if any - of cold water immersion therapy, ice baths, on muscle blood flow and oxygenation."