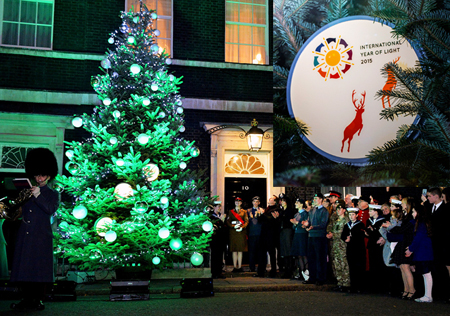 Switching on the Christmas lights at the home of UK Prime Minister David Cameron not only marked the festive season, but also signaled the lead-up to 2015, the International Year of Light.

A trio of "IYOL" lights was placed on the Downing Street tree, in London, this week to mark the coming year. The lights feature a seasonal interpretation of the IYOL symbol – a parade of reindeer in a spectrum of colours that is also used in the IYOL’s sun logo.

The International Year of Light was so designated by the United Nations and will be a twelve-month celebration with aims including promoting light-based technologies, raising awareness of light pollution and energy waste and championing sustainable lighting in the developing world.

The organisers say 2015 will mark a number of inspirational scientific anniversaries including the 1000th anniversary of the publication of early works on optics by Islamic scholar Ibn Al-Haytham and 200 years since Augustin-Jean Fresnel proposed the notion of light as a wave. In the UK, over 40 individuals and organisations representing science, engineering, culture and the arts are working together to mark the year through an impactful national programme of events and activities.

Dr Beth Taylor, Chair of the UK National Committee for IYOL, commented: “We couldn’t wish for a better start to the year than to have it celebrated in the lights of the Downing Street Christmas tree. This gives us a great foundation to build on as we work to make an impact, and achieve our key goals, throughout 2015. I am very grateful to the team at 10 Downing Street and the lighting specialists who have made this possible.”