Application of state-of-the-art lithography has driven Moore's law at the giant Taiwanese foundry. 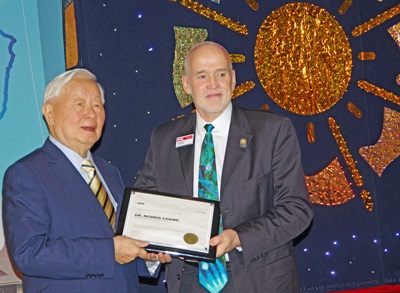 Vision: Chang and Arthurs in Tawian

The optics and photonics society said it wanted to recognize the entrepreneur for his key role in establishing the semiconductor foundry concept. SPIE’s CEO Eugene Arthurs made the presentation during the opening ceremony of the international Optics and Photonics Taiwan conference (OPTIC 2014) that took place there this week.

“SPIE believes that Dr. Morris Chang’s leadership of TSMC and his ‘invention’ of the semiconductor foundry concept has changed the world for the better in a very significant way,” Arthurs said.

“The extraordinary progress of semiconductor technology over the last several decades has relied on visionary leadership. Throughout changes in technologies, economies, and markets, Dr. Chang has constantly supported technical development, and courageously invested in people and manufacturing in ways that have been truly revolutionary.”

A graduate of MIT and Stanford, and a 25-year Texas Instruments (TI) veteran, Chang founded TSMC back in 1987. At that time, there were no fully independent silicon device foundries.

As an independent entity, TSMC could offer smaller “fabless” companies without a production site the opportunity to scale to volume manufacturing – without any risk of competing with them.

Changing the world
At the Taiwan event, Arthurs used the emergence of the smart phone as an example of how Chang’s vision has changed the world and enabled small, innovative companies to compete with large, established manufacturers like TI, Intel, IBM and others.

“Think of the powerful processors that we carry around to increasingly facilitate our lives, and how these affordable semiconductors of truly impressive capability have enhanced our ability to connect and communicate with each other, indeed, transformed our daily existence,” he said.

“SPIE believes that much of this is due to Dr. Chang, and it is with great honor that we recognize his positive disruptive role with the SPIE Visionary Award.”

Accepting the award, Chang said that that TSMC would need SPIE's help in prolonging of Moore's law over the next several years.

Recently, Chang and the company have taken a critical step in that direction – just last week ASML revealed that TSMC had become the first chip maker to place an order for production-worthy extreme ultraviolet (EUV) lithography scanners.

Seen by ASML as the only viable option for continuing the march of Moore’s law well into the next decade, the development of EUV tools suitable for the volume production environment has encountered some huge challenges in recent years.

Chief among those has been building laser-based EUV light sources with the kind of output power and stability needed for the likes of TSMC to make circuits cost-effectively. Now, with the first orders for production tools finally coming in, it appears that EUV is on track to continue the historic rate of transistor shrinkage.

Lithography equipment is used at each of its front-end fabs. Two new state-of-the-art EUV tools are set to be installed at the 12-inch facilities next year, while another two are due for a source upgrade to meet production requirements. Volume production with the tools, which will be used initially to pattern a small number of critical layers within the wafers, should start in either 2016 or 2017.

Last month, TSMC reported that its sales in the year to October totaled NT$621 billion ($19.9 billion) – up nearly 24 per cent on the same period in 2013 as the semiconductor market trends towards a model where more than half of all foundry-made devices are fabricated by TSMC.

Since 2009, the company has also been dabbling in solar technology. It has built a facility to make thin-film PV products based on copper indium gallium diselenide (CIGS) material.

Presented only occasionally, the SPIE Visionary Award recognizes major contributions to technology and its implementation. Previous winners have included the Nobel chemistry laureate and buckminsterfullerene co-discoverer Richard Smalley, Hamamatsu founder Teruo Hiruma, and Lothar Späth, the German politician who was instrumental in restoring Jena as a leader in optics research and technology following reunification.