The emergence of applications in cancer diagnostics, cardiology and gastroenterology will help drive the market for clinical optical imaging to $2 billion by the end of the decade.

That’s according to a new market report from the research and consultancy company Lux Research. Analyst Milos Todorovic reckons that growing use of optical coherence tomography (OCT) will account for the bulk of that expansion.

Todorovic reports that OCT will retain its current 60 per cent share as the market for clinical optical imaging doubles in value over the next five years,

“OCT is expected to retain its dominant position as it successfully builds on its ophthalmology applications while expanding into cardiology, oncology and gastroenterology,” announced Lux. “Other technologies such as near-infrared spectroscopy (NIRS) and photoacoustic tomography (PAT) also hold high potential for growth, while applications such as real-time optical biopsies and surgical guidance will grow into multi-billion-dollar segments over the long term.”

“The growth of the optical imaging market will be fueled by the OCT,” added Todorovic, pointing out that the technique pioneered by James Fujimoto and others had the clearest path to mass adoption.

So far, OCT has been used overwhelmingly in ophthalmology, for imaging of the retina, retinal nerve fiber layer and optic nerve head – the latter being of particular value to the study of glaucoma, a disease that is difficult to diagnose and which ranks as the world’s second-largest cause of blindness.

According to a 2013 review article in the medical journal Current Opinion in Ophthalmology, OCT has been nothing short of revolutionary, providing analysis of the choroidal thickness in healthy eyes as well as disease states such as age-related macular degeneration, central serous chorioretinopathy, and diabetic retinopathy. 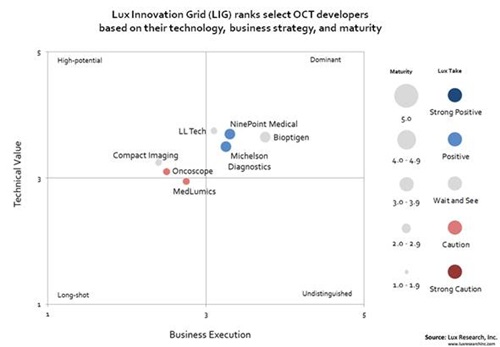 Cancer diagnostics to drive growth
While plenty of future applications in that field are anticipated, Lux analyst Nick Kurkjy told optics.org: “We see cardiology, oncology, and gastroenterology applications as major OCT growth areas in the coming years. Of these, oncology, particularly non-invasive cancer diagnostics, will be the fastest-growing space in the coming decade.”

In the longer term, Todorovic and Kurkjy also see a big opportunity for photoacoustic tomography (PAT), an emerging imaging modality that combines optical and ultrasound technologies and is currently under evaluation in clinical trials.

“Companies developing multimodal systems such as photoacoustics are attractive because they address larger markets,” Todorovic said. Kurkjy believes that the most immediate application area for PAT will be in oncology:

“We see potential for its use for non-contact tumor imaging for skin, breast, and other cancers,” the analyst said. “Another potential use case is for circulating tumor cell (CTC) detection, which will be very useful for the diagnosis and prognosis of different cancers.”

However, that will depend on the successful outcome of ongoing trials, and most are still at too early a stage to make any significant judgment, Kurkjy noted.

Importantly, each of those firms has achieved FDA and CE clearances, allowing it to market its products in both the US and Europe.

Those looking to cut the cost of OCT equipment also show potential. “Typical OCT systems, the size of a medical cart, cost on average between $80,000 and $250,000,” the Lux team estimates. Compact Imaging, a Mountain View, California, venture that has developed smaller systems based on “multiple reference” OCT, is rated as "high potential" by the analyst firm.

Also featuring on the innovation grid are Michelson Diagnostics and NinePoint Medical, both ranked as “dominant”, while Oncoscope and MedLumics are rated as having strong potential but more of a long-shot in terms of business execution.

MedLumics is among those developing portable forms of OCT, something that Kurkjy says offers “substantial potential value”. However, the technology is still thought of as relatively immature.

“Developers of portable OCT devices will need to validate the value and scalability of their technology before they will have a significant impact on the OCT market,” said the analyst.