Profits down in latest fiscal year but Jena firm set to invest heavily in development of new ophthalmic surgery equipment. 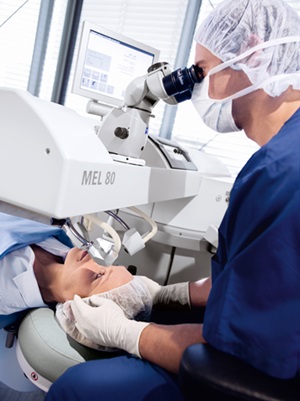 Shares in Carl Zeiss Meditec, the clinical wing of the optics and microscopy giant, dropped in value by around 6 per cent on the Frankfurt stock exchange after the company just missed its annual sales target.

For the year ending September 30, the Germany-headquartered firm delivered revenues of €909 million. That was up very slightly on the figure of €906 million for the previous year, but below the range of €910 million to €940 million estimated back in May – something blamed largely on currency effects.

CEO Ludwin Monz said of the result: “In spite of adverse currency trends and to some extent difficult markets, we have achieved a satisfactory result.”

Pre-tax earnings of €115 million were down more than 20 per cent on last year’s figure of €147 million, with costs increasing partly as a result of the 400 or so additional employees taken on when the Jena company acquired intraocular lens specialist Aaren Scientific in January.

Research costs were also slightly higher, at €99.8 million, and that figure is set to increase over the next few years as Carl Zeiss Meditec invests in the development of of a new product segment.

Although it will not reveal details of the products due to the highly competitive nature of the market, a spokesman did tell optics.org that it was in the area of ophthalmic surgery equipment, and that the company was expecting to spend around €10 million per year - for a minimum of three years.

Russia slowdown
In his letter to shareholders in the new annual report, Monz indicated that without the adverse currency effects the company would have posted a year-on-year sales increase of 3 per cent.

“Business in Russia slowed down dramatically, due to the expiry of government investment programs,” he added.

In terms of sales distribution by business unit, the acquisition of Aaren had a marked impact, helping to drive revenues in the surgical ophthalmology sector up by just over 20 per cent to around €146 million.

“Even without taking the acquisition of Aaren Scientific into account, this [business unit’s] growth would have been in the double digits,” said the company, adding that the first intraocular lens in the standard segment to be jointly developed by the firms was launched on the market just before the end of the financial year.

The synthetic lenses are used to replace their damaged natural equivalents in cataract patients, and with the ageing global population Carl Zeiss Meditec sees this as a key opportunity for business growth – as well as providing the kind of recurring revenues that should make its future sales more predictable.

The company’s microsurgery business unit, which has traditionally been its largest sales generator, was particularly impacted by adverse exchange rates. It posted revenue of €390 million, down very slightly on the previous year's figure of €394 million.

Meanwhile the ophthalmic systems division posted a 4.6 per cent decline in sales to around €373 million after coming under what was described as “intense competitive pressure”.

Glaucoma challenges
Though it would not reveal any specific research and development goals, in its annual report the company chose to highlight the challenges posed by glaucoma – a disease that is the world’s leading cause of irreversible blindness.

According to Paul Foster, a glaucoma specialist at London’s renowned Moorfields Eye Hospital, by 2020 around 80 million people will have the disease – representing an increase of 20 million in just ten years.

One key problem is that glaucoma is very difficult to detect in its early stages, while the general lack of awareness about the severe problems that it can cause and a relative lack of patient compliance during treatment also need to be overcome.

“Far too often, especially in developing countries, people present to a clinic too late, when they already have partial blindness and significant, irreversible loss of their visual fields,” Foster told Zeiss.

“In more developed countries risk factors for glaucoma can be identified earlier, which creates other challenges – for instance, many people with ocular hypertension are monitored over many years to identify new glaucoma signs. However, most will never actually develop the disease.”

That large number of “false positives” inevitably leads to high costs and an unnecessary burden on healthcare systems – with a recent study in the UK suggesting that it might be better not to monitor those with ocular hypertension, since only one in 20 people with the symptom went on to develop glaucoma.

However, one recent development that has had a positive impact is the emergence of optical coherence tomography (OCT) equipment from Zeiss and others, which Foster says has led to a far better understanding of the optic nerve head.