CEO John Ambroseo says that funding for the US brain imaging project could expand three-fold. 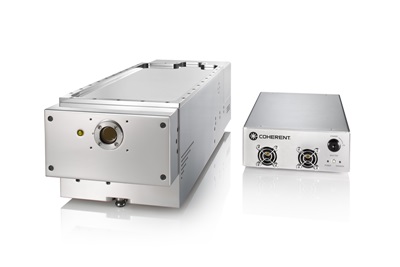 Laser vendor Coherent has reported sales of $205 million for the closing quarter of its fiscal year 2014 – up by 4.5 per cent sequentially but down 3.7 per cent when compared with the same period last year.

The result brought the Californian company’s annual sales total to just under $795 million, which represents a slight decline from $810 million in fiscal 2013. Annual net income also dropped, to $59.1 million from $66.4 million a year ago.

Despite some mixed results and an uncertain macroeconomic outlook, CEO John Ambroseo told investors that he expected fiscal 2015 to produce some better numbers and pointed to ophthalmic applications in the medical sector as a bright spot in terms of orders.

“The economic news coming out of China and Europe has raised many questions about how these economies affect the global photonics industry,” he said. However, the answers to those questions are not simple:

“Slowing growth in China does not have a uniform effect on the laser marketplace,” Ambroseo pointed out. “Markets, applications or technologies that enjoy central or regional government support tend to be more immune to macroeconomic pressure.”

Where that pressure is felt is in the general manufacturing sector, the CEO added, saying that small companies would tend to suffer more than their better-established, larger and more aggressive competitors.

ELI opportunity
Turning to Europe, Ambroseo said that the generally weak economic picture and the specter of deflation had led to commercial customers becoming very cautious. “The bright spot is medical OEM, where several European companies are among the worldwide leaders for vision correction and disease management of the eyes.”

He also noted the way in which funding for scientific research was increasingly being directed towards large projects such as the European Commission’s twin flagship efforts on graphene and the more controversial mapping of the human brain, although it is not yet clear what impact that will have.

“These large programs may create infrastructure dollars, but how much will benefit the photonics industry is unclear,” he told an investor conference call. “The best opportunities reside within the ELI (Extreme Light Infrastructure project).”

Over in the US, Coherent is one of a group of optics and photonics companies to have pledged $30 million in private-sector support to the Brain Research through Advancing Imaging Neurotechnologies (BRAIN) initiative.

In contrast to the larger European effort that is aiming to create a large-scale computational model of a human neural network – something that has alienated swathes of experimental neuroscientists – the BRAIN project is focused on the study of clusters of hundreds or thousands of neurons.

“This involves many experimental techniques including laser imaging,” Ambroseo said. “The [BRAIN] project is gaining momentum and there is hope for a two- or three-fold expansion of the current annual $100 million budget.” 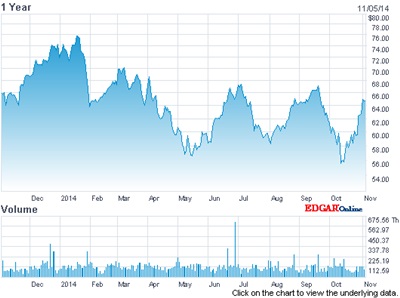 Up and down year: Coherent's stock price

Fiber laser target missed
There were mixed results in Coherent’s attempts to make an impact in the high-power laser materials processing space. While partnerships with customers focused on welding and cladding applications has helped grow sales of direct-diode lasers, the development of a fiber laser portfolio has fallen short of expectations.

“We failed to reach our $10 million sales objective for fiscal 2014,” Ambroseo admitted. “The time from design win to volume has been slower than expected and it has taken longer than planned to launch the multi-kilowatt platform that addresses the sweet spot of the market.”

Up against an extremely tough competitor in the form of IPG Photonics, Coherent is now scheduling the release of these higher-power lasers at a major trade show in Europe or China next year – with the LASER World of Photonics event in Munich a likely candidate.

With sales of nearly $103 million – more than half of Coherent’s total – in the latest quarter, microelectronics remains the company’s largest application sector by far, and shifting fortunes in the mobile handset market are having an impact.

Apple’s iPhone 6 has proved to be a huge hit with customers, taking with it some market share from Samsung. Any shift is important for Coherent. Although its lasers are used in the production of backplanes for both LCD and OLED screens, the different requirements have an impact on its service revenues.

“The mix shift from OLED to LCD affects service revenue since OLED has a tighter process window and requires more frequent replacements,” he explained.

In the similarly complex world of semiconductor capital equipment, there have also been swings in demand as the likes of Intel and Samsung’s memory chip making unit make major investments in technologies such as three-dimensional transistor devices known as FinFETs.

Coherent should benefit from those leading-edge investments, Ambroseo said, while in the area of printed circuit board (PCB) production the company’s new “Hornet” carbon dioxide laser platform.

It should help customers to cut costs because it eliminates the need for an acoustic-optic modulator component.

• Coherent's stock price slumped by around 9 per cent in early trading following the results announcement, giving up gains made over the past month.