Competitive market should be good for consumers but is forcing many a re-think in the lighting industry.

Last week Samsung became the latest big-hitter to change its strategy in the LED lighting sector, with the Korean technology conglomerate making a significant retreat. Having identified the emerging application as a key growth area just four years ago, it will now target only its domestic market with LED lamps.

The raft of changes are understandable in a market with such strong dynamics. In its third quarter results announcement last month, GE reported flat lighting revenues overall, but also that its LED–related sales had grown 59 per cent year-on-year – the kind of growth rate that GE’s venture segment looks better placed to handle.

IHS analyst Stewart Shinkwin said in a research note last week: “Traditional technology lamp manufacturers have had to restructure their portfolios away from conventional technology products toward the more lucrative LED lamp and luminaire markets.”

In the past, those traditional manufacturers have been able to increase their overall sales by augmenting incandescent bulbs with new offerings like halogen lamps. But with LED, things are panning out very differently.

Because halogen bulbs typically last only three times as long as an incandescent, the net effect of shifting to the more expensive halogen is minimal. However, the shift to longer-lasting compact fluorescent lamps (CFLs) can lead to a 50 per cent fall in lamp revenue for manufacturers: “Although the cost is four times that of incandescent, a CFL lifetime is eight times as long, thus is replaced much less frequently,” says Shinkwin. 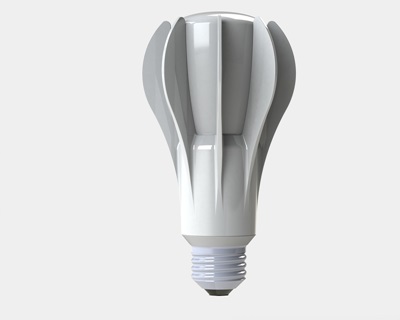 Structural changes
And that effect is even more stark when it comes to LED lighting, prompting the recent structural changes as the established suppliers attempt to compete low-cost providers in China, along with more nimble, focused and technologically advanced companies like Cree and Soraa – the latter a Californian start-up co-founded by 2014 Nobel physics laureate Shuji Nakamura.

Although the lighting market is growing overall – Shinkwin sees the global market for lamps growing from $29.1 billion in 2013 to $34.6 billion in 2019 - the process is squeezing margins that may continue to decline over time. “Such a development could cause some manufacturers to leave the market altogether if they cannot compete at the low price points,” predicts the analyst.

“Samsung exiting the LED lamp business can be seen as a sign of the difficulty to make profit in that business, and companies which are not fully focused on LED lighting as their sole business may prefer to focus on more profitable areas,” Shinkwin told optics.org.

“A similar situation happened at Toshiba America's Lighting division when they pulled out of the LED market, and now their lighting business just operates in Europe and Asia – and mainly in their home market of Japan.”

Mixed feelings
Samsung's exit will provide mixed feelings for leading lamp manufacturers, adds Shinkwin. “On one hand it's a good thing, in that if Samsung committed to having a significant impact on the lamp market, with its brand power and financing, it could have taken significant share from leading manufacturers.”

“On the other, it shows that margins are being squeezed to near-unprofitable levels in some markets.”

The analyst points out that because Samsung was not a particularly big player in the LED lamp market (in contrast to its high-ranking market position in terms of LED chip production), for its move to have wide repercussions – and that the decision is more indicative of the wider struggle faced by large companies in the face of such a dynamic technological switch.

“It will be business as usual for most of its competitors,” Shinkwin said.

The strategic retreat will also mean that Samsung will have more of its LED component capacity available for other applications, even though the internal production for its own lamps accounted for a minority of the LED chip demand.

“The majority is for other things including [Samsung’s] internal displays market in particular and also external merchant lighting sales,” he explained. As a result, there will not be a huge impact on the utilization rate of Samsung’s vast LED chip fabrication capacity.

Shinkwin says that LED fab utilization was already quite high and would remain at a reasonably healthy level. “What it does mean is that they will not be needing any more MOCVD [metal-organic chemical vapor deposition equipment], at least not any time soon,” he said. “They will also be more easily able to serve their internal market for mobiles, TVs etc.”