Soitec hints at another record-breaking cell

French firm says that it will shortly release results on a four-junction concentrator PV device. 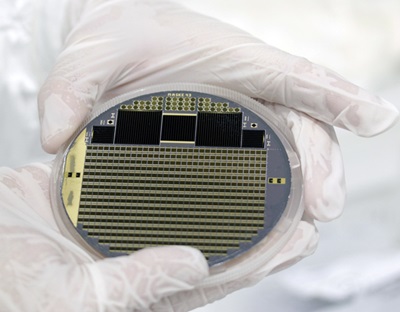 Soitec, the French company that specializes in advanced electronic materials and concentrated photovoltaic (CPV) technology, has hinted at the development of another record-breaking solar cell.

In an announcement buried in the details of its latest financial update, the Bernin firm stated: “Efforts dedicated to the development and commercialization of a next-generation high-efficiency solar cell continue to develop and Soitec is anticipating to release soon a new world record in conversion efficiency of its proprietary four-junction solar cell.”

State-of-the-art commercial versions feature three junctions, yielding conversion efficiencies as high as 40 per cent at the cell level – and upwards of 35 per cent for the best-performing modules.

Last year, Soitec partnered with the Fraunhofer Institute for Solar Energy Systems (ISE) in Freiburg to fabricate a 44.7 per cent efficient cell – adding that it should be possible to reach as high as 50 per cent with the four-junction approach.

According to the latest figures from the US National Renewable Energy Laboratory (NREL), this remains the world’s most efficient research-grade cell for now, just ahead of a triple-junction device developed by Japan's Sharp that is based on a so-called “inverted metamorphic” structure.

Losses still racking up
Despite the impressive laboratory work by Soitec and others, CPV remains barely a footnote in the global deployment of solar power. Soitec’s own sales in the solar sector have thus far been dominated by a 44 MW (peak) project in South Africa – accounting for two-thirds of €35.2 million in PV-related revenues reported for the first half of the firm’s 2014/2015 financial year.

Despite that, the division still racked up an operating loss of €61.9 million – although that figure was at least down from the €101.1 million operating loss posted a year ago.

That situation might change in the second half of Soitec’s fiscal year, depending on whether demand from a major US project begins to filter through in time. The firm said:

“In the second half, strong sequential growth guidance for solar revenue remains linked to the ramp-up of [our] San Diego facility in relation with anticipated green light for triggering the 150 MW recent commercial agreement signed with a US independent power producer.”

If that green light is not received in time, any revenues will be pushed into fiscal 2015/2016. “Based on [the] current time line and potential shift in closing transactions, contributions from the 150 MW contract or other current projects could be postponed and are not totally secured to have a significant revenue contribution for the Solar Energy division until the end of the current fiscal year,” Soitec warned.

In the meantime, the company says that it will continue looking to raise cash from what it calls “asset monetization” and other financing initiatives.

That looks to be much needed. As of September 30, Soitec listed €43.9 million in cash and equivalents on its balance sheet, after making an overall net loss of €82.9 million on sales of €106 million in the latest half-year.