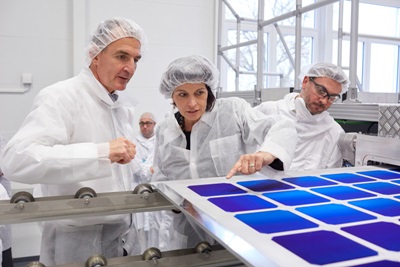 Developed with the local Centre Suisse d'Electronique et Microtechnique (CSEM), the advanced cells can also be made with low-temperature production steps – therefore promising to match high performance with low cost if the process can be scaled successfully.

Peter Pauli, CEO of the Meyer Burger Group said: "The industrialized manufacturing of high-performance solar cells is at the heart of photovoltaic production. [This] project drives further development of a forward-looking, highly efficient cell technology.

“Working together with CSEM, we will further optimize the important economic advantages, such as lower production costs and higher energy yields at the same time and thus lower the costs of solar energy in the long term.”

The so-called “Swiss-Inno HJT” project (HJT is short for heterojunction), which began in February 2014, has been backed with a budget of CHF 10 million Swiss francs over three years - from the Swiss Federal Office of Energy, industrial partners and the local Canton of Neuchâtel authority.

Industry collaboration
Jean-Nat Karakash, a Neuchâtel State Council member, said of the project: "If you forge collaboration with local industry using cutting-edge technologies from research and development institutes, innovative ideas can be quickly implemented into products.

“Meyer Burger Research, formerly Roth & Rau Research, made the right decision when they chose this region as the location for their research and development center several years ago.”

As well as providing a site for pilot production, more development work to make the HJT cells even more efficient and cheaper to produce are expected at the site.

Christophe Ballif, VP of the photovoltaics center at CSEM, explained how the project was an example of technology transfer to industry. “The foundations for the innovative production process were developed at the Institute of Micro Technology at the Swiss Federal Institute of Technology (EPFL) in Neuchâtel,” he said.

“Thanks to the Meyer Burger Group and the support of the CSEM PV-center, we quickly brought the technology to industrial maturity. With the Swiss-Inno HJT project, we are taking a significant step further with the innovation and performance of PV cells.”

If the additional optimizations are successful, the project partners expect to deliver a module efficiency of 21 per cent, production costs below 0.6 CHF/W (peak) – around $0.63 per Watt of output - and estimated electricity costs of 0.07 CHF per kilowatt hour from a renewable source.

That efficiency figure compares with around 20 per cent for typical monocrystalline silicon modules in volume production today, and 14 per cent conversion for thin-film CdTe modules made by First Solar.

This creates a heterojunction between the two types of silicon, and a cell efficiency of more than 22 per cent. Crucially, the drop in efficiency at high operating temperatures is said to be minimal in comparison to conventional cells, which ought to lead to higher solar energy yields overall.

Another purported advantage is that there are only a few key manufacturing steps, including plasma-enhanced chemical vapor deposition (PECVD), and that the process operates at temperatures close to 200°C – compared with more than 700°C need to make conventional silicon cells.

“This saves a great deal of energy and makes it possible to produce thinner silicon wafers, which in turn lowers material requirements,” say the project partners. “In addition, considerably less silver is required for the contacts.”

Once the Swiss-Inno HJT project is completed, the pilot line is expected to serve as a key platform for more research and development improve the process under industrial production conditions.