Sales of LED lamps and systems up 72% on last year as former Carl Zeiss executive Olaf Berlien takes over from Wolfgang Dehen. 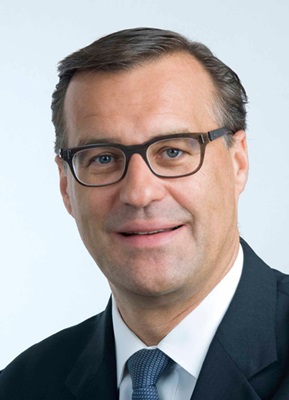 Lighting giant Osram Licht is set to pay its first shareholder dividend since floating on the stock market, and has appointed a new CEO to take over from the departing Wolfgang Dehen.

The flurry of announcements came as the Germany-headquartered company revealed its latest financial results, and claimed that its transformation was paying off as it adapted to the challenges facing the wider lighting industry.

Chief among those was news that Olaf Berlien, currently CEO of the tech-focused construction firm M+W Group, is set to take over as Osram’s CEO in January.

Previously an executive at Carl Zeiss and armed with a doctorate from the Technical University of Berlin, the 52-year-old will also take on the role of chief technology officer. However, the immediate priority for Berlien will be to oversee another phase of cost-cuts at the company, with 7800 more jobs set to be eliminated – many of them in Germany.

Between his Zeiss and M+W stints, Berlien was in charge of the technologies division at steel maker ThyssenKrupp, but left under a cloud in late 2012 after the company reported losses amid an ill-fated Asian expansion and allegations of corruption.

The management switch at Osram follows the unexpected departure from the board of former CTO Peter Laier earlier this year, while Dehen was originally appointed by the firm’s former parent company Siemens back in 2011 to oversee Osram’s eventual stock market flotation.

Unprecedented transformation
Explaining the changes, Osram’s supervisory board chairman Peter Bauer said that Dehen had told the board that he wanted to leave the company shortly after the departure of Laier. He also waived the normal six-month CEO transition period so that the company could install his successor as quickly as possible.

“Wolfgang Dehen has led Osram through an unprecedented transformation,” Bauer told a press conference, highlighting the upheaval impacting the entire industry as it manages the change from traditional to solid-state lighting technology based on LEDs.

Critical to that has been a slimming-down of Osram’s operations that has seen nearly 9000 jobs relating to traditional lighting technologies lost already.

"He conducted a very successful IPO and has created the conditions for Osram to be profitable and take on a leading position in the future of digital lighting," Bauer added.

The speed of the transformation was evident in Osram’s sales figures for the three months ending September 30, in which the company reported 72 per cent year-on-year growth in sales of LED lamps and systems.

Those solid-state lighting technologies accounted for €144 million in the latest quarter, equivalent to 10 per cent of Osram’s total sales. Its Osram Opto division, which actually fabricates the LED chips that are central to the lighting revolution, as well as a range of laser didoes and other photonic components, accounted for 21 per cent of sales in the quarter.

However, the older technology that Osram classifies as “classic lamps and ballasts” still amounted to one-third of the company’s total €1.34 billion quarterly revenues. 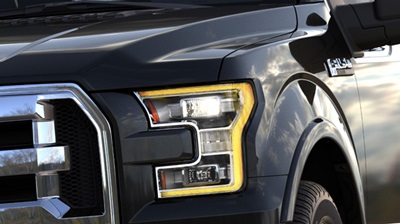 Phase two “push” strategy
The ongoing transformation is proving very costly to Osram in the short term, with just under €600 million in charges as the company shed 11 facilities and 8700 jobs over the past couple of years.

Referred to as “push phase one” of the transformation strategy, it is estimated to have saved a cumulative €871 million thus far, with a further €400 million in savings anticipated next year.

Next up is “push phase two”, which will see a further 7800 jobs lost and more restructuring in Germany as Osram targets saving an additional €1.3 billion. Achieving that is expected to cost an initial €450 million.

Bauer and his management team want to set up a “lean” organization capable of competing in the new lighting industry conditions, where there are many more competitors than Osram, Philips and GE have been used to as bulb-makers.

Meanwhile, the firm is to issue its first shareholder dividend - of €0.90 per share, equivalent to half its €193 million net income for fiscal 2014 - since its stock market flotation as a public company separate from Siemens.

“We want our shareholders to benefit from this and plan to distribute a dividend for the first time for fiscal 2014,” said the outgoing Dehen. “The planned dividend continuity for fiscal 2015 underlines our confidence in the positive development of Osram.”

But while sales revenues for fiscal 2015 are expected to be similar to the €5.1 billion posted for the year ending September 2014, earnings will be significantly lower as Osram incurs the cost of its phase-two cuts. 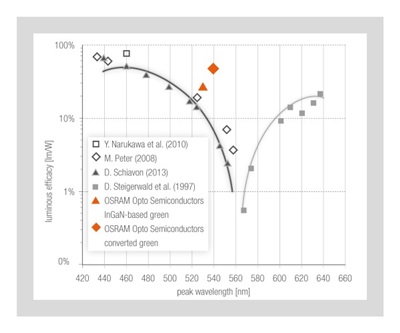 Green LEDs break efficacy records
In other developments at the Munich firm, red and yellow LEDs should become cheaper as Osram switches their fabrication from 4-inch gallium arsenide wafers to the more cost-effective 6-inch format. The investment will mean Osram produces all of its visible-range LED chips on the larger-sized wafers.

“LED technology is becoming more and more popular, for example in the Ford F-150, which is one of the best-selling pickup trucks in the US and came into the market in 2014 with a full LED front lighting from Osram,” the firm added.

In addition to that, Audi’s R8 LMX and BMW’s i8 have become the first two production cars to feature laser headlamp modules.

In the laboratory, Osram Opto has also been working to improve green LED technology, which because of the so-called “green gap” problem has lagged well behind its red, yellow and blue cousins.

Using two different approaches – one based on a new phosphor combined with a blue LED chip – Osram’s researchers appear to have made some good progress.

Under the “Hi-Q-LED” project funded by Germany’s Federal Ministry of Education and Research (BMBF), its InGaN devices have shown record 147 lumens per Watt efficacy in the green spectrum at 530 nm. The alternative, phosphor-based approach has delivered a record 209 lumens per Watt centered at 540 nm but with a much broader emission spectrum than the direct green emitter.

Osram research engineer Thomas Lehnhardt said: “Continuous improvement of the blue LED chips, an optimized excitation wavelength and an increased degree of conversion of the phosphor converter are the winning combination underlying the new record-breaking LED.”

Neither device is yet ready for mass production, however, with a two-year development time frame typically required for that transformation from lab to fab.