UK-based maker of imaging sensors for the Rosetta comet mission is still benefiting from strong demand for space applications. 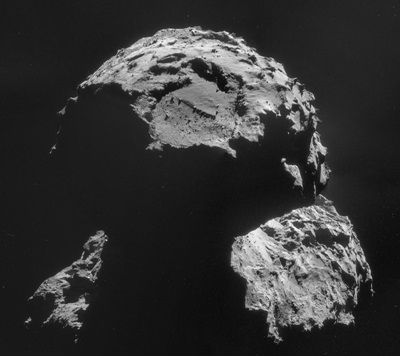 e2v technologies, the UK-headquartered company whose imaging sensors are on board the Rosetta mission scheduled to land a craft on a comet later this week, has reported increased sales, orders and profit in its latest half-yearly results.

And thanks to strong demand for imaging sensors from the space industry, the Chelmsford company’s 12-month order book now stands at £138 million – up from £130 million.

While remaining cautious in the current macroeconomic environment, e2v’s new CEO Steve Blair wrote in a London Stock Exchange filing that order intake in space imaging had been particularly strong in recent months.

The company’s backlog features new orders for sensors from the US for the Large Synoptic Survey Telescope (LSST), as well as the European Space Agency (ESA) for Planetary Transits and Oscillations of stars (PLATO). More system orders come courtesy of the Lebedev Physical Institute of the Russian Academy of Sciences.

“We have implemented restructuring in UK space imaging to ensure that the cost base is aligned to the level of growth being delivered,” noted Blair. “The step up of activity anticipated in the second half is largely underpinned by major programs in the order book, although there are specific programs that are to be secured for delivery in the year. The nature of this business is that it will remain technically challenging as we provide leading-edge technologies for scientific discovery.”

Segment sales
Imaging segment sales of £37.4 million were up 6 per cent from last year, partly reflecting growing demand for machine vision applications in Asia, and some recovery of industrial markets. Further growth is anticipated from new product introductions in the second half - including the firm’s new line-scan CMOS camera called “Uniiqa+”.

The largest proportion of e2v’s sales now relate to RF power devices for radiotherapy, countermeasures and industrial processing applications, with segment revenues up 11 per cent on last year to £41.8 million.

However, sales of (non-imaging) semiconductor devices dropped by 8 per cent to £23 million.

On November 12, the ESA’s Rosetta spacecraft is due to eject its “Philae” lander towards comet 67P/Churyumov-Gerasimenko. One of e2v’s visible-range CCD sensors has been providing close-up views of the comet via the Rosetta navigation camera mission since the craft “awoke” this summer following a ten-year journey.

Philae, which also features e2v sensors, is expected to take around seven hours to descend to the comet’s surface, with hopes for a signal to confirm a successful touchdown set to arrive on Earth in a one-hour window centered on 16:02 GMT.