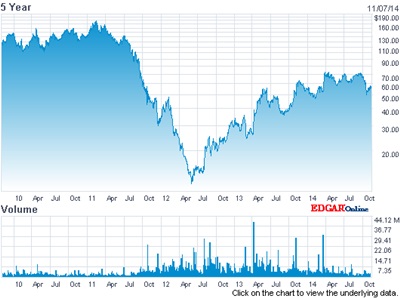 First Solar, the world’s largest manufacturer of solar panels based on thin-film photovoltaic cells, is to restart hundreds of megawatts of production capacity next year in anticipation of strong demand.

Speaking to investors discussing the Tempe, Arizona, firm’s latest financial quarter, CEO Jim Hughes said: “We have recently begun restarting before the idle lines of capacity at our Malaysia facility. The restart of these lines will add over 360 megawatts of capacity in 2015. Additionally we have started deploying existing toolsets to add two new lines of capacity in our Perrysburg, Ohio facility.”

Those extra lines in Ohio should be operational by the middle of next year, yielding another 100 MW of capacity. For comparison, the company is expecting to produce around 1.85 GW this year.

No "YieldCo" spin-off (yet)
The news came as First Solar appeared to disappoint the markets with lower-than-expected revenues of $889 million – down from $1.26 billion a year ago – and a slight reduction in sales guidance for the full year.

According to reports, investors had also been hoping for the company to spin-off its power-generating plants into a separate "YieldCo" company, and First Solar’s stock dropped in after-hours trading as a result.

Hughes did not rule out the possibility of such a spin-off in the future, but said that the company was exercising patience for now. “We are not prepared to file a registration statement and pursue a listed yield vehicle at this time,” he said.

But he was keen to concentrate on the positives, noting that the latest improvements to the company’s cadmium telluride modules had delivered a conversion efficiency of 15.9 per cent in pre-production runs of “significant volume”.

That compares with the company’s production average of 14.2 per cent in the latest quarter, and 14.6 per cent on its best-performing production line in October.

“While these improvements are not scheduled to roll-out across the fleet until next year, this is an example of the progress we continue to make on our technology roadmap,” the CEO told investors.

In August this year, First Solar said that a laboratory-scale CdTe cell had been certified with a record-breaking conversion efficiency of 21 per cent (the record for a thin-film cell), indicating the potential headroom for improvements to production devices. 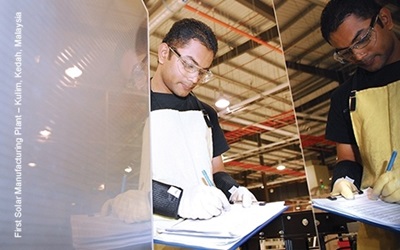 UK venture building dual-use Oxfordshire array
Meanwhile, the company said that it had now broken ground on a new 46 MW solar farm in the UK with its joint-venture partner Belectric. The latest project, in Oxfordshire, is said to be able to power a quarter of the homes in the city of Oxford at peak output, and represents the fourth plant that the two companies are developing in the country.

Combined with other farms in Wiltshire and East Anglia, the venture expects to deploy a total 80 MW of DC generating capacity, with land in the rural areas under the solar arrays also set to remain in agricultural use.

“With areas set aside to support biodiversity, this is a prime example of the multiple benefits that best-in-class solar farm projects can deliver to the UK,” claims Belectric.

The UK project is helping to diversify First Solar’s portfolio away from the dominance of US-based facilities, with Hughes also noting bookings in Israel and India, as well as a 140 MW (AC) destined for Chile – the company’s largest single booking in the quarter.

Explaining the decision to re-start production capacity, Hughes said that the anticipated reduction of investment tax credits for solar power in the US at the end of 2016 will pull forward some demand for panels.

“We want to maximize our ability to capture some of that demand,” the CEO added. “In addition a number of our international markets are performing very well.” However, the likelihood is that there will also be a subsequent slow-down in 2017, he warned.

At the moment, First Solar is operating at only 77 per cent of its existing capacity, but Hughes said that this was partly due to the technology upgrades being implemented across its production lines to improve conversion efficiencies – meaning that some lines had been out of commission for a period.