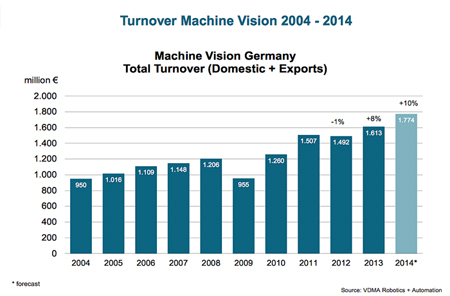 “The machine vision industry in Germany will grow in 2014 by at least 10% minimum and overall industry turnover will exceed its sales forecast of about €1.8 billion by the end of this year,” stated Dr. Olaf Munkelt, Chairman, VDMA Machine Vision Group, at the Vision expo in Stuttgart. He was presenting the German Engineering Association’s latest assessment of the national MV market.

He added, ”For 2015, we are expecting further growth despite the macroeconomic uncertainties. In short, foreign demand is increasing while domestic demand is catching up. Strong momentum from abroad is expected, in particular from Asia and the USA.”

“All over the world we are seeing strong demand for automation solutions and MV benefits as well. With the need for 100% quality checks keeping pace with production speed and highest process reliability, it would be difficult to achieve the increasing requirements of a modern production environment without machine vision,” said Munkelt. 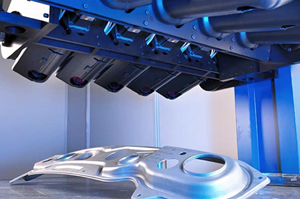 Pressing need: sales of German MV systems are on the up.

Munkelt concluded, “Beyond the factory environment, embedded vision systems increasingly play a greater role. Whether in the medical technology field, in the food industry or in logistics, performance-adapted systems, often with a small form-factor, are needed to perfectly implement classical applications of machine vision like identification tasks.

"Machine vision has been conquering many new fields of application, in and outside the factory. Improved quality, greater reliability, increased safety and cost-effectiveness are benefits that are just as crucial in non-manufacturing contexts as in the realm of industrial production. In 2013, turnover of machine vision in non-industrial sectors grew by 25 percent raising the share of non-industrial applications in overall turnover to 29%.