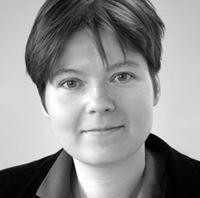 The work of Professor Anne Staubitz and PhD student Julian Linshöft is this week reported in Angewandte Chemie. Compared to the conventional inorganic forms of semiconducting polymers, the fabrication of the new organic tin form can be cheaper; moreover these are lightweight materials, which can be advantageous for many applications, for example in the transport sector.

Prof. Staubitz, who is from Kiel’s Otto Diels-Institute of Organic Chemistry, explained, “Organic solar cells still do not achieve the same efficiencies as inorganic solar cells based on silicon so there is still a substantial need for research in this area - an important criterion of such semiconductors is how efficiently they absorb sun light in order to convert it into electricity.

Polymers, in which this “band gap” is small, typically have a red or, sometimes, purple colour. One aim of synthetic organic semiconductor research is therefore to produce organic polymers with small band gaps. However, the development of such strongly light-absorbing, deeply coloured plastics is usually difficult and therefore an active area in current research.

Prof. Staubitz commented, “The appearance of new material from our laboratories clearly shows to the naked eye that have been successful in our development such plastics. The polymer is deep purple in solution and almost black when processed into a thin film.”

Crystals of the monomers (left) and pieces of polymer film (right), showing the chemical structure of the plastic.

In order to achieve small energy gaps, the Kiel team employed a new concept. They incorporated organic tin in the form of cyclic molecules (known as “stannoles”) into the carbon-polymer backbone. Tin belongs to the same chemical group as carbon and is therefore similar in some of its properties.

However, the electronic properties of the stannoles and the corresponding carbon congeners (cyclopentadienes) are very different. “Tin is not just an overweight carbon atom,” said Prof. Staubitz. “It can lower the energetic levels in its organic compounds dramatically.” Until now, it was not possible to use these special properties of tin in polymeric materials. Connecting the individual molecular monomers proved to be a difficult chemical engineering challenge for the researchers.

“This was a high risk project, because coupling reactions that can select between two different organic tin groups were not known in chemistry before”, Staubitz says. Therefore, Ph. D. student Julian Linshöft did not just have to develop a selective, but a highly selective cross-coupling reaction. “The first difficulty was to find the correct reactivity patterns for the monomers”, Linshöft recalls. “For this, there was no lead in the chemical literature so far.”

The experiment was a success. The team was able to prepare the desired plastic using palladium as a reaction catalyst. The material can be processed easily into thin films, which are gleaming black and whose application in solar cells can now be tested. Linshöft, whose work was funded by a scholarship of the German Foundation for the Environment says: “Finally, we are able to prepare these new semiconducting plastics. Their full potential can be assessed in the near future.”

Matthew Peach is a contributing editor to optcis.org.