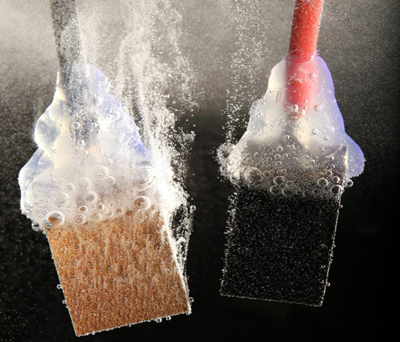 Promising: a profusion of tiny bubbles escapes from the electrodes.

By combining a pair of solar cells made with perovskite and low-cost electrodes, scientists have obtained a 12.3 percent conversion efficiency using solar energy to release hydrogen from water. Project leader Michael Grätzel at EPFL, Lausanne, Switzerland, claims this is a record efficiency using “earth-abundant materials” as opposed to rare metals. The work has just been published in Science.

There are many different current approaches to harnessing the power of the sun and to optimize the performance of solar energy. More efficient silicon photovoltaic panels, dye-sensitized solar cells, concentrated cells and thermodynamic solar plants all pursue the same goal: to produce a maximum amount of electrons from sunlight. Those electrons can then be converted into electricity.

At the Laboratory of Photonics and Interfaces at EPFL, led by Michael Grätzel, where scientists invented dye solar cells that mimic photosynthesis in plants, they have also developed methods for generating fuels such as hydrogen by so-called solar water-splitting. To achieve this, the scientists use either photo-electrochemical cells that directly split water into hydrogen and oxygen when exposed to sunlight, or they combine electricity-generating cells with an electrolyzer that separates the water molecules.

By using the latter technique, Grätzel’s post-doctoral student Jingshan Luo and his colleagues have achieved what they call a “spectacular performance”. The device converts water into hydrogen at an efficiency rate of 12.3 percent, based on the energy diffused by the sun onto perovskite absorbers, thus eliminating the need for rare-earth metals in the production of usable hydrogen fuel. 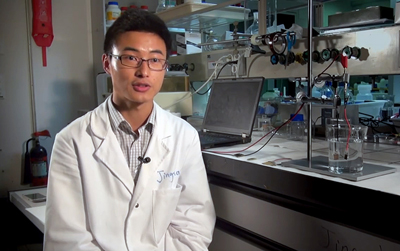 Jingshan Luo and EPFL colleagues have achieved a 12.3% conversion rate.

Luo says this high efficiency provides stiff competition for other techniques used to convert solar energy. But this method has several advantages over others: "Both the perovskite used in the cells and the nickel and iron catalysts making up the electrodes require resources that are abundant on Earth and that are also cheap,” he explained. “However, our electrodes work just as well as the expensive but commonly used platinum-based models."

The conversion of solar energy into hydrogen also makes its storage possible, which addresses one of the biggest disadvantages usually faced by renewable electricity—the requirement to use it at the time it is produced.

Grätzel said, ”Once you have hydrogen, you can store it in a bottle and you can do with it whatever you want to, whenever you want it." Hydrogen can either be burned – in a boiler or engine – releasing only water vapor, or it can be used in a fuel cell to generate electricity on demand. And the 12.3% conversion efficiency achieved at EPFL "will soon get even higher," promised Grätzel.

The high efficiency values are based on a characteristic of perovskite cells: their ability to generate an open circuit voltage greater than 1V (silicon cells are limited to 0.7V, by comparison).   Luo added, “A voltage of 1.7V or more is required for water electrolysis to occur and to obtain exploitable gases.”

To achieve such outputs, three or more silicon cells would be required, whereas just two perovskite cells are enough. “This is the first time we have been able to get hydrogen through electrolysis with only two cells," Luo concluded.

In the following video, Luo explains how the EPFL team achieved the solar conversion of water into hydrogen and oxygen: