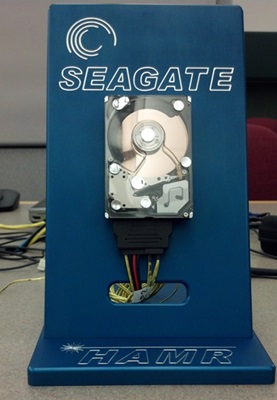 Announced last week by Invest Northern Ireland (Invest NI), the project centers on a technique known as heat-assisted magnetic recording (HAMR). It increases the storage density of disks by using the laser to induce changes in the magnetic storage material.

If successful, the project could lead to enormous demand for visible-range semiconductor lasers in hard drives, with Seagate’s own estimates suggesting that the annual market for HDDs will reach around one billion units by 2020.

The project at Seagate’s 480,000 square foot Springtown site will require a team of 178 staff overall, and create an additional 35 positions for highly skilled research engineers. It will also be supported by the “Ansin” materials research hub at Queen’s University, Belfast, which is headed up by Robert Bowman and houses a range of optical analysis equipment.

Invest NI is contributing just under £8 million of that project cost, partly thanks to support from the European Regional Development Fund.

David Mosley, Seagate’s president of operations and technology, said of the agreement: “The explosive increase in demand for storage from mobile applications, cloud-computing infrastructures, social media, business applications and consumer markets is driving the need to develop new technology that can deliver greater storage capacity.

“This project will see the Springtown research and development team, supported by Ansin at Queen’s University Belfast, apply its expertise to the task of developing HAMR technology and help the company achieve competitive advantage.”

Strategic importance
Seagate has been researching the HAMR concept for several years, and last year Bowman predicted that lasers and other optical components would become “critical” to the HDD industry over the next decade as demand for storage – particularly in the cloud computing sector – soars.

And although there are some key challenges in terms of photonic integration and high-temperature component performance, with more than a million recording heads produced by the Springtown facility every day, the HAMR application could emerge as a huge opportunity for laser suppliers if the development work is successful.

According to a recent strategic update presented by Seagate executives, HAMR should be able to deliver an areal storage density of between 1.2 and 5 Terabytes per square inch, with initial product integration slated for 2016.

Aside from its importance to Seagate, the development is being welcomed as a major boost for the local economy – the US-headquartered firm employs 1300 people in the area. Announcing the project, Northern Ireland’s First Minister Peter Robinson said it represented the largest research and development investment in the region this year, accounting for more than 40 per cent of Northern Ireland’s target for 2014.

“It is the latest in a series of research and development investments over recent years that have enhanced the Springtown facility’s strategic importance within the wider Seagate operation,” he said.

Derry mayor Brenda Stevenson added: “This announcement is of huge significance for Derry, and demonstrates the commitment of Seagate to the city by further underscoring its strategic importance in the firm’s future plans.

“The city has been impacted by several blows to the local manufacturing industry in recent years, and [the] announcement is extremely positive in restoring confidence in the industry."

Seagate has itself just announced a pre-tax income of $392 million on quarterly revenues of $3.8 billion for the three months ending October 3, as well as a 26 per cent hike to its annual shareholder dividend.

However, the company also lists $3.8 billion in long-term debts on its balance sheet, accruing interest at a weighted average of 5.1 per cent.