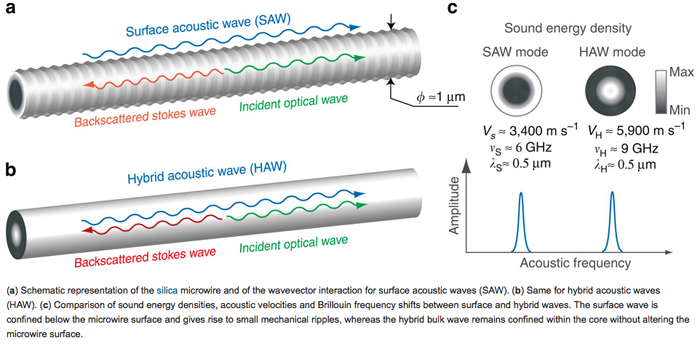 Researchers at the Femto-ST Institute, Besançon, France, working in collaboration with colleagues from the Charles Fabry Laboratory (CNRS/Institut d'Optique Graduate School), based in Paris, have discovered what they are calling “a new type of light diffusion” in tiny optical fibers with a diameter of just 1µm.

They say that the phenomenon, which varies according to the fiber’s environment, could be used to develop new sensors that are both innovative and highly sensitive. The work has this week been published in Nature Communications.

Optical microfibers are created by tapering down regular silica fibers until they are stretched out to a diameter of one micrometer. To produce these tiny objects, researchers at the Charles Fabry Laboratory heated and stretched conventional optical fibers used in telecommunications, which typically measure 125µm in diameter.

The remainder of the study was carried out at the Femto-ST Institute in Besançon. By injecting a laser beam into these silica microwires, the CNRS researchers observed a new type of Brillouin light scattering for the first time, involving surface acoustic waves. This discovery was subsequently confirmed by a numerical simulation, which helped verify the physical mechanism at play.

Since the diameter of the fibers is smaller than the wavelength of the light used (1.5µm, in the infrared region), the light is extremely confined inside. As it travels, it infinitesimally vibrates the wire, displacing it by a few nanometers. This distortion gives rise to an acoustic wave that travels along the fiber surface at a velocity of 3,400m/s, according to the results of the researchers. The wave in turn affects the propagation of the light, as part of the light radiation is returned with a different wavelength in the opposite direction.

This phenomenon had never been observed previously, for it only occurs when light is confined in a subwavelength-diameter fiber. In standard optical fibers, light travels essentially in the core of the fiber (with 10µm diameter), and consequently does not generate surface waves.

Since the waves generated by the confinement of the light travel along the surface of the microfibers, they are sensitive to environmental factors such as temperature, pressure and ambient gas. This makes it possible to design highly sensitive and compact optical sensors for industry. These results also help improve our knowledge of the fundamental interaction between light and sound on an infinitesimally small scale. 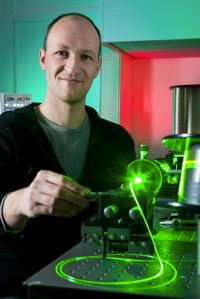 In the Nature Communications paper, Jean-Charles Beugnot of the Femto-ST Institute says, “We report clear-cut evidence of a new type of Brillouin light scattering driven by surface acoustic waves (SAWs) by use of a subwavelength-diameter silica fiber. Our SAWs travel the wire surface at 3,400 ms-1 and give rise to new useful optical sidebands around 6GHz in the scattering spectrum. This work may support the investigation of such SAWs in many different photonic platforms, such as photonic crystal fibers and integrated optical devices.

”In addition, SAWs can find strong potential applications for optical sensing and detection because these acoustic waves are inherently sensitive to surface features and defects and are already used in many sensing systems (such as MEMS). They could be seen as a new class of Brillouin optical sensors that rely on the modulation of SAWs to sense a physical phenomenon, such as temperature, stress and gas.

“Changes in amplitude and frequency of the Brillouin signal through the silica microwire could be advantageously used to measure the presence of the desired phenomenon. One can also imagine a strong interaction between surface waves and surface plasmons by depositing a thin layer of gold or silver. These results thus show the potential of optical microwires and nanowires for surface Brillouin scattering, optical sensing and nonlinear plasmonics. Finally, this work improves understanding of light–sound interactions in subwavelength optics and in nanophotonics.”