New banknote checker and remote, high-resolution,"eye-like" camera will be visible at Vision.

The Fraunhofer Institute for Photonic Microsystems in Dresden has announced it will present two new optical systems at the forthcoming Vision 2014 expo in Stuttgart, Germany, between November 4-6. 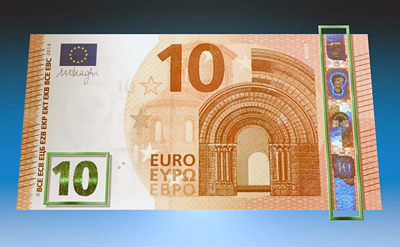 Across the Eurozone, a new €10 banknote has been in circulation for a few weeks. It is intended to be more robust and more resistant to forgery thanks to modified colors, new watermarks and a special finish. But the 4.3 billion newly-minted notes will eventually reach the stage when they no longer meet the standards required by the European Central Bank and need to be withdrawn from circulation.

However this withdrawal process will no longer take place at banks or through strictly-controlled ATMs, but increasingly in supermarkets or petrol stations, and other places where large amounts of cash are tendered.

To determine the authenticity and usability of banknotes, the Fraunhofer IPMS and six partners from six EU countries joined a European alliance project called Eurothentic. Their aim: to develop a device to automatically check and collect banknotes, such as at the cash register in a supermarket.

Project manager from the Fraunhofer, Uwe Schelinski, commented, “This project is tailor-made for us because it allows us to transfer our expertise in image scanning and modern methods of signal processing to the image acquisition process.”

Besides the integration of a line-shaped image acquisition unit into an electro-mechanical cartridge system for obtaining the required image information during the banknote transport, the IPMS scientists incorporated high-performance control and processing electronics into the system.

A micro-processor and associated software analyze the image information, and provide information as to whether the banknote is both authentic and fit for use shortly after the banknote is inserted the system. The technical result is available to the industry partners that are participating in the project.

Fraunhofer IPMS researchers have also developed a 3D laser scanner with a light-travel time measurement system based on the human eye, which can focus on key sections of an image and capture them at higher resolution. The system functions independently of ambient light conditions and delivers high-quality 3D information in real time, even over great distances. 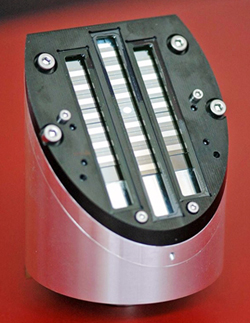 Depth information, which is used for tasks such as navigation, security and observation of dangerous facilities, is gaining importance to enable more accurate and faster data analysis. But, so far, there has been no 3D sensor that can identify objects in this way remotely, under variable lighting conditions.

In fact, the development of this sophisticated device involved three Fraunhofer institutes – the Institute for Physical Measurement Techniques, Freiburg, the Institute for Intelligent Analysis and Information Systems, Sankt Augustin, and the IPMS. The team of scientists combined pulse run time – laser distance measurement and an adaptive MEMS system into the novel laser scanner.

Project manager Thilo Sandner explained, “The reflector mechanism directs the time-modulated transmission beam over the object to be measured. The light of the transmission beam that is dispersed over that area is shown on a photo-detector with a high bandwidth using several receiving reflectors that move synchronous to the beam, and the distance of the object is determined using the measured phase or pulse run time of the light that is received.”

The scanning system concept is based on a 1-D MEMS array that performs resonant scanning in a vertical direction, which can be pivoted and rotated with a conventional electro-dynamic drive. We were able to significantly increase the visual fill factor with the use of 22 receiving reflectors with individual apertures of 8.4×2.3mm2 and integrated reflector position sensors, and thus created the technical conditions for performing measurements from distances of up to 30 meters.