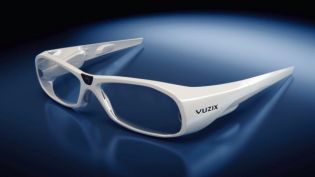 Smart glasses and near-eye displays have a high profile, thanks to products such as Google Glass and Oculus Rift coming to market and capturing the imagination of both the public and the press.

Vuzix, a supplier of video eyewear and smart glasses products to consumer, commercial and entertainment markets, has a long track record in the sector, having been active since 1997. The Rochester-based company has now designed a new smart-glass platform that could have a big impact.

Instead of a projector-based approach, the Vuzix system uses waveguides built into the lenses of the smart glasses to present an image in front of the wearer's eyes, an approach that should be of benefit both to the optical fidelity of the image and the comfort of the user.

The system is due be a focus of Vuzix's presence at the January 2015 Consumer Electronics Show (CES), where wearable technology of various kinds looks set to be a hot topic.

"Despite the recent attention to the likes of Google Glass, systems to project images onto small screens in front of the eye are not new - and not perfect either," commented Dan Cui of Vuzix. "They can involve substantial projector units mounted on the side of the head, and need considerable electronics to operate. Attempts to provide larger images and improved field-of-view lead to larger optical prisms, and the devices become more unwieldy. They do the job, but don't provide a particularly complimentary form factor, and the optics has its limits."

See-through waveguides
Vuzix has done away with conventional projector units entirely. Instead, carefully controlled nanoetchings form a waveguide inside the lenses themselves, 1.4 mm thick. These see-through imaging waveguides are fed by small light-engines mounted to one side of the lens, so that the image duly appears in the glass lens itself, rather than being projected onto it or the wearer's eye from outside.

"The light engines we have created employ a very small pinpoint area as the insertion location, or pupil, which allows the image to be expanded in two-dimensions across the waveguide and presented to the eye as a picture 960 x 540 pixels in size," noted Cui. "This is a big difference that sets us apart from others in the marketplace. Other platforms, even ones also based on total internal reflection, only expand an image in one-dimension for presentation to the wearer, with poorer results."

In the Vuzix system the result is an image filling a 30 degree field of view for the wearer, in a platform able to support wireless connectivity and run Android OS. Development of the system and of passive and dynamic holographic waveguides, now covered by a range of patents, included a license agreement with Nokia for its Exit Pupil Expanding (EPE) technology related to the critical two-dimensional expansion of the image. Contracts with the US Government have also supported the company's development roadmap.

The level of effort reflects the complexities of the approach, which requires exact control of the nanostructures inside the glass and an accommodation of the delays that occur as the image travels across it, along with a new high-contrast LED micro-scanning display engine. "Overall there's a lot to it," said Cui. "Even so, manufacturing time for the waveguide lenses is very quick. We can make thousands per day."

The company recently announced completion of an upgrade to its cleanrooms, tool processing equipment and waveguide manufacturing facility in Rochester, in preparation for increased market attention.

Early pioneers Vuzix has a long association with the concepts underpinning the technology, going back to the company's founding in 1997. Originally incorporated as VR Acquisition Corp, it soon acquired the assets of Forte Technologies, a manufacturer of virtual reality headsets originally owned by Kopin. Today Kopin remains the primary supplier of microdisplays for Vuzix existing product line. 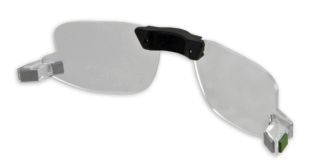 In the frame: true eyeglass styling:

"Google is the flame that lit the current fire, which has been a good thing for everyone," commented Cui. "But Vuzix was in at the beginning, with some of the foundational patents in the field of wearable technology that have fed directly into Google Glass. In this field the IP is very important. There are many players now, but most of them have very little IP."

Recently the company's flagship product has been the M100, a monocular head-mounted display unit incorporating a Kopin display module and functioning as a stand-alone computing device, using WiFi or running apps without the need for cloud connectivity. A partnership with Lenovo signed earlier in 2014 has seen the M100 launch in the Chinese market. But to date Vuzix has specifically targeted it at pro-sumer users, as a wearable computing system for engineers and industrial workers, rather than a consumer unit.

"Google went after consumer users immediately, but we knew that consumers needed killer applications in order to accept devices on your head," noted Cui.

Work on waveguides as an alternative display technology was first commercialized by the company during 2013 in the M2000AR, a monocular platform ruggedized for industrial applications that also included tracking sensors, a hi-resolution camera and an HDMI interface.

The next-generation waveguide prototype due to be shown at CES in 2015 has the working title of B2500AR, built around an optical engine small enough to allow the unit to fit inside the frames of conventionally styled glasses.

"A move to waveguides is going to dramatically transform head-mounted displays," commented David Lock of Vuzix Europe. "There are significant opportunities to use it in different products, now that the manufacturing technology has been perfected, although ultimately customers will buy the features and benefits it brings rather than the optics. As with the smart phone sector, the applications are what will now drive this technology."