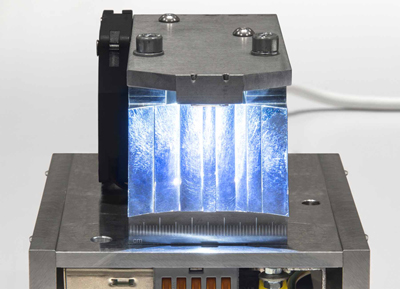 Every headlight function but from a unit smaller than a box of matches - says Osram.

The manufacturer claims the new source delivers a luminance three times that of existing versions, which would mean that a single LED could be used to provide a complete low beam. Conventionally, several LED chips have always been required.

The high brightness is the result of a combination of Osram’s established UX:3 chip technology, ceramic conversion technology and high-current technology used in projection applications. In future, says Osram, “it will be possible to design much smaller headlights – with every lighting function smaller than a box of matches.”

Stefan Grötsch, Senior Key Expert at Osram OS, commented, “In developing this LED, we applied our experience in projection applications to combine the high-current technology used in such applications with our UX:3 chip technology and ceramic conversion technology, which is standard practice for developing white headlight LEDs.”

A low beam unit measuring only 30x50mm generating 1400 lumen from a single LED chip as its light source could be reality in only a few years time, says the manufacturer. At 200 megacandelas per m2, this LED has three times the luminance of existing light emitting diodes for these applications and loses less than 10% of its intensity even at high operating temperatures of 85°C.

Even the special mounting technology based on the Osram Ostar platform was transferred from projection to this automotive application. This involves soldering the chip directly to the copper. The large amounts of heat produced as a result of the high output can be dissipated more easily, which improves the thermal connection.

Grötsch added, “The high brightness values were measured in the laboratory but they should be achieved soon also by series production LEDs. The results of research and development work will be gradually flowing into product development at Osram Opto Semiconductors next year.

”Together with the use of laser technology which produces very high luminance, a series LED could lead to extremely compact headlight solutions, expanding the Osram product portfolio in this sector. It is conceivable, for example, that headlights will become ultra-compact, comprising a laser high beam and LED low beam, and that other automotive applications such as interior lighting and new types of head-up display will follow.

”These displays will project important information directly onto the windshield, such as video of the area directly in front of the car, or navigation instructions, and will be much more vivid and graphic than is the case with existing systems. They will therefore be classed as "augmented reality" displays because they enrich the viewing experience with additional information and therefore create a fresh impression of reality.”

A single LED for low beam. The distribution of light under laboratory conditions indicates that the relevant standards will be met.