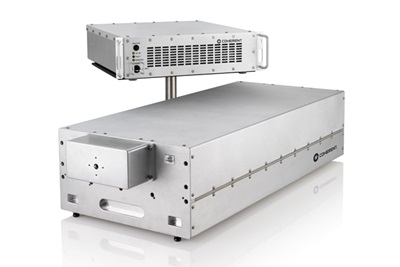 Laser vendor Coherent has reported a strong increase in bookings and news of a giant order for excimer laser equipment worth more than $100 million, offsetting first-quarter sales that came in slightly lower than analysts had been expecting.

CEO John Ambroseo told an investor conference call: “There is no doubt that our first-quarter revenues and earnings were lackluster. Bookings, however, paint an attractive long-term picture.”

At $193.6 million, revenues for the three months that ended December 28 came in at the lower end of the California company’s guidance. That figure represented a sequential decline of more than 9 per cent due to unexpectedly weak demand in certain microelectronics packaging applications.

Ophthalmic strength; excimer deal
But bookings of $201.5 million – up very slightly on a sequential basis and a more striking 14 per cent compared with one year ago – reflected what Ambroseo described as “very strong” orders for ophthalmology applications, including the company’s largest order so far for cataract procedures.

Also contributing to that growing order book in the December quarter were improving market conditions in the scientific research sector, where passage of the Ryan-Murray budget bill in the US saw funding restored to key federal agencies like the National Institutes of Health and National Science Foundation.

And since the end of last year, Coherent has now signed a huge deal to supply excimer laser annealing (ELA) systems that are set to be used in both LCD and organic LED flat-panel display production.

Orders placed by a key customer, the systems integrator Advanced Process Systems Corporation, totalled $101.4 million and consist of two different ELA platforms. One of those is a new configuration derived from Coherent’s existing Linebeam 1300 platform. Ambroseo said that during the roll-out of the 1300, customers identified an unexpected benefit that helped with the production of higher-resolution displays.

Multiple end users are set to use the ELA systems just ordered, with the Coherent CEO indicating that a “good portion” would end up producing backplanes used in new OLED displays.

3kW fiber laser still in development
On the fiber laser front, Ambroseo said that the company had received multiple orders for its 1 kilowatt fiber laser, but admitted that there was still some development work to do before the company was able to release a 3 kW version. As yet, there is no release date for that product.

“We will continue to work with customers to learn more about how to optimize the final design,” he said. “In one case, the customer has decided to pursue what I can only describe as a component-level strategy for cost and brand management. We don’t think this will be an approach mimicked by others, but it certainly deserves to be watched.”

Another development noted by Ambroseo is glass maker Corning’s acquisition of part of laser system integrator Innolas, which has experience in glass cutting. Describing that deal as “intriguing”, the Coherent CEO said:

“It is reasonable to assume that the deal is intended to accelerate the adoption of strengthened glass through better process flow.”

Emerging applications; China slowdown?
Strengthened glass and sapphire processing are seen by many in the laser industry as major emerging applications – particularly since Apple’s adoption of sapphire in smart phones. Ultrashort-pulse sources are key to that, and Ambroseo also reported Coherent’s first production order in this area, for multiple units of its “HyperRapid” picosecond laser to cut strengthened glass.

Ending on a somewhat cautious note, Ambroseo warned that recent data from China suggested a slowing of economic growth in what has been an enormous market driver for lasers used in materials processing over recent years. 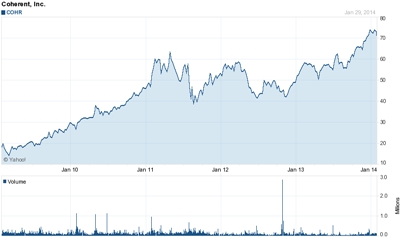 “Input from customers in China is mixed,” said the CEO. “The larger players have seen their growth slow over the last several months. The smaller players have a more optimistic view, but their businesses can swing wildly on a small number of orders.”

“When we consolidate all the current inputs, we conclude that 2014 will be slower for materials processing in China compared to 2013.”