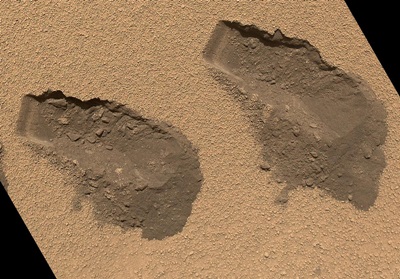 The laser on board the ChemCam instrument that is busy collecting evidence on Mars was the first tool to show that water was present in the planet’s soil, according to one of a series of papers just published by the scientific teams involved.

Roger Wiens, leader of the ChemCam instrument team at Los Alamos National Laboratory (LANL), said that the first spectroscopic evidence was collected shortly after the tool was first switched on:

“We made this discovery literally with the very first laser shot,” said Wiens. “Every single time we shot at dust we saw a significant hydrogen peak.” The ChemCam team’s paper, entitled Soil Diversity and Hydration as Observed by ChemCam at Gale Crater, Mars, states that the level of hydration measured “likely accounts for an important fraction of the global hydration of the surface seen by previous orbital measurements”.

The presence of water was subsequently confirmed by the Curiosity rover’s “SAM” (Sample Analysis at Mars) instrument, which comprises a gas chromatograph, quadrupole mass spectrometer and a tunable laser spectrometer to provide a full range of analyses.

The SAM instrument indicated that all of the soil encountered on Mars contains between 1.5 and 3 percent water, enough to explain much of the near-equatorial hydrogen that had been observed more than a decade ago by LANL’s neutron spectrometer on board the earlier Mars Odyssey spacecraft.

In addition to extremely fine-grained particles that appear to be representative of the ubiquitous Martian dust covering the planet’s surface, the ChemCam team discovered coarser-grained particles of up to one millimeter in size that were typical of the composition of local rocks.

Digging deeper
The instrument tested more than one hundred targets in a location dubbed “Rocknest”, finding that the dust there contained consistent amounts of water regardless of the sampling area.

And when Curiosity dug deeper into the soils at Rocknest in order to sample newly unearthed material, it found the same tiny concentration of water (approximately 2 percent).

The consistent water signature picked up by the rover in the ubiquitous Martian dust may coincide with the tiny amount of ambient humidity in the planet’s arid atmosphere, says LANL.

Multiple observations have indicated that although the flowing water responsible for shaping and moving the rounded pebbles seen in the vicinity of the landing area has long since evaporated into space, some may still exist deep below the surface of the planet at equatorial locations – and water-ice is known to exist near the surface of the Martian poles.

And while the amount of water present might be small, it is reckoned to be enough to become useful for potential future visitors from Earth.

“In principle it would be possible for future astronauts to heat the soil to derive water to sustain them,” said Wiens.

Speaking at last month’s SPIE Optics and Photonics conference in San Diego, Wiens said that data on some 80,000 ChemCam laser shots had already been returned for analysis, and predicted that much more would be discovered by the tool when it arrives at Mount Sharp, a three-mile-high peak that can be glimpsed in some of the images sent back by the rover (see video below).

Mount Sharp looks interesting to scientists because it appears to contain layers of sedimentary history dating back several billion years. As on Earth, those layers – reminiscent of the Grand Canyon - should feature rich information about the geologic and climate history of Mars.