Nationwide events aim to promote technology to politicians and beyond.

The recently-launched US National Photonics Initiative (NPI) is focused on promoting to policy makers the vital role optics and photonics plays in the American economy. In a series of events, visits and town hall meetings NPI activists are bringing legislators out of the halls of Congress and into the labs.

Since the summer of 2013, national photonics bodies OSA and SPIE have helped organize promotional and educational events across the USA, including at the University Of Central Florida’s Center for Research and Education in Optics and Lasers, (CREOL), the University of Arizona, the annual meeting of the Rochester Regional Photonics Cluster, NY, and at the company Directed Light Inc. in California.

In August, CREOL, in conjunction with the Florida Photonics Cluster, hosted Congressman John Mica (R-FL) for an NPI discussion and a tour of CREOL’s facilities. Reportedly, Rep. Mica was so impressed by the experience; he agreed to author an op-ed in the Orlando Sentinel on the need for investment in optical sciences.

Later in August, the University of Arizona hosted Congressman Ron Barber (D-AZ) for a tour of the College of Optical Sciences and a question and answer session with over 60 local industry members, students and faculty. 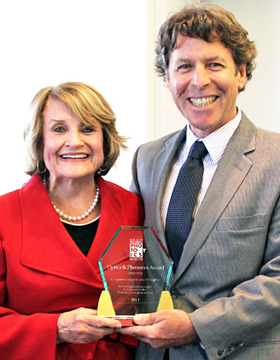 At the RRPC’s Annual Meeting on September 5, Congresswoman Louise Slaughter (D-NY) presented the keynote address at an NPI panel discussion regarding its goals and the role RRPC members can play in reaching them.

More than 60 photonics-related companies are located within a 20 mile radius of Rochester, and local institutions such as the University of Rochester’s Institute of Optics provide much-needed research and job training programs.

The NPI recently released a white paper, Lighting the Path to a Competitive, Secure Future, which contains recommendations for increased investment in photonics research and greater collaboration between academia, industry and government.

Rep. Slaughter, who was earlier presented with the RRPC’s Optics & Photonics Award, told the annual meeting, “Rochester’s optics, photonics and imaging industries have been vital parts of the local economy, and with our highly-skilled workforce, cutting-edge facilities and investment in new technologies, we can ensure it stays that way.

”Our federal government has long played a vital role in supporting the research, development and commercialization of new fields, and even in these tough economic times I believe we must maintain this commitment to these industries that are so vital to the economic future of our region and our country.”

As an indication of the importance of political support for the sector, Rep. Slaughter has over the past 10 years secured over $680 million in federal funding for the University of Rochester’s laser lab, as well as for projects involving local companies such as Exelis and Lumetrics.

Furthermore, on September 16, Congressman Mike Honda (D-CA) toured the laser technology company Directed Light in San Jose, CA. After the tour, Rep. Honda sat down with Directed Light staff to discuss the role of optics and photonics in advanced manufacturing and the need for continued investments.