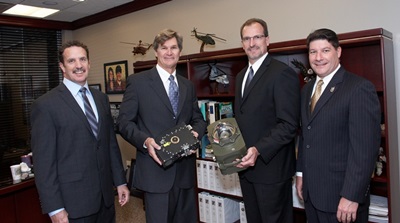 Daylight and Northrop executives with the CIRCM system

The giant defense contractor said that the lightweight system, which is referred to as “common infrared countermeasures” (CIRCM) technology, completed its latest series of tests in mid-August.

Those tests saw the system exposed to “intense environmental conditions”, including the extreme temperatures found in explosions, vibration, altitude and humidity, as well as crash shock.

"Passing each of the testing requirements makes a clear statement that the Northrop Grumman CIRCM system is ready and safe to fly, and provides more factual evidence and proof of the maturity of our solution," said Jeff Palombo, vice president and general manager of Northrop Grumman's land and self-protection systems division, in a company release.

He added: "Our open architecture solution continues to meet program requirements while achieving on-time performance, propelling us toward the EMD [engineering, manufacturing and development] phase of the program and the fielding of the next generation of aircraft survivability for our warfighters."

Helicopter protection
While infrared countermeasures have been used on larger aircraft for many years, the QCL-based approach allows for much more compact designs, meaning that it can also be used to protect smaller helicopters and fixed-wing planes from incoming missile threats.

The availability of QCLs with different emission wavelengths in the mid-infrared region also provides the potential for more advanced protection.

Northrop also pointed out that the completion of flight safety testing came shortly after a preliminary design review held in July, when the company presented the US Army with a system design said to surpass the CIRCM program's requirements for weight and electrical power.

“After being awarded a technology development contract to develop the CIRCM in 2012, the company completed acceptance testing on the first suite of equipment and delivered a complete hardware set in January – two months ahead of schedule,” it said.

Meanwhile Daylight said that it had now completed all the deliveries of its “Solaris” QCL systems to Northrop for the CIRCM program, which also saw BAE Systems contracted to provide its existing direct infrared countermeasure (DIRCM) technology for evaluation. Solaris is said to offer simultaneous "breaklock" jamming with high power and at multiple wavelengths, with an eye on more advanced future threats.

“Completing the laser deliveries on time, on budget, and fully compliant further validates Daylight's leadership as the provider of QCL-based solutions to the defense market for military applications,” announced the San Diego firm.

CEO Timothy Day added: "Daylight Solutions remains committed to both Northrop Grumman and the US government in its delivery of best-in-class laser systems for aircraft survivability and soldier protection."