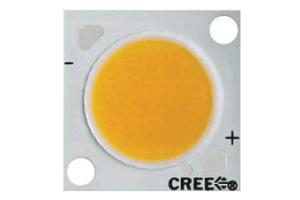 LED-developer Cree has unveiled a new addition to its XLamp CXA product family, one that it claims represents the industry's first high-density LED array.

The CXA1520 is said by the company to double the system intensity of spot lights compared to previous arrays and provide unrivaled lumen power.

This should enable improvements in system cost and power consumption, and lead to products delivering an equivalent intensity and light quality to a 39W ceramic metal halide source while consuming up to 50 percent lower power, according to Cree.

Commenting on the new array for Cree, Tom Tang of Taipei-based Tons Lightology said that the array shared the same light-emitting size as existing CXA arrays, making life easier for vendors. "This allows us to address very high output applications without changing the optics," he said.

Net profits nearly doubled to $86.9 million for the fiscal year, compared to $44.4 million reported for fiscal 2012.

One factor in the rising revenues has been the company's partnership agreement with retailer Home Depot, signed in 2012, which has allowed it to target LED bulbs at domestic customers looking to replace existing incandescent lighting.