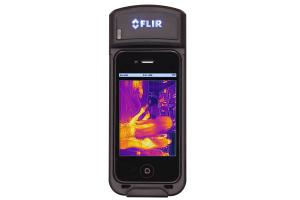 FLIR: thermal imaging on a smartphone

Two recent announcements from developers of infrared sensors point the way towards new applications for thermal imaging systems, as the technology behind them continues to make rapid strides.

At the Association for Unmanned Vehicle Systems International (AUVSI) expo, held in August 2013 in Washington DC, FLIR showed a prototype thermal camera small enough to potentially fit onto a smartphone.

The Oregon-based developer equipped an iPhone with thermal imaging capability by building a smartphone sleeve around its Quark camera core.

Although the device was designed and constructed as a proof-of-concept demonstrator, CEO Andy Teich told optics.org that no significant compromises were involved in its capabilities or performance.

"The two main challenges of building this product were size and power consumption," he said. "The Quark camera core measures about 0.75 inches along a side, which allowed it to fit into the iPhone sled fairly easily."

Power consumption was lowered to 750 mW, allowing the device to be readily powered by the lithium-ion batteries in the iPhone sled, but once this was taken care of the core's capabilities were unaffected by its new environment.

"The Quark core can perform to its normal specification in this configuration," confirmed Teich.

Whether consumers will come to demand smartphones with IR-imaging capabilities in the future is an open question, but FLIR sees it as one of many possible avenues by which to grow its thermal imaging business.

"Our strategy is to have as many 'irons in the fire' as possible, by pursuing numerous vertical markets and applications spaces," commented Teich. "The two biggest barriers to any market is price and awareness. Both are critically important, and FLIR has invested significantly in both areas in the markets it currently serves."

The fruits of that investment should be continuing improvements in the size, weight, power and cost of the system. Four areas in particular were singled out by Teich as being the focus of attention: IR pixel size reduction; wafer-scale packaging of the IR sensor; optics size and cost reduction; and camera signal processing.

"The next few years will bring significant advancements in these areas of the technology," he said.

The MIR640 unit is a is a 17-micron, 640x480 pixel camera core, capturing video at 60 frames per second (fps), said to be twice the rate of competing solutions. Potential users could be OEMs in the security, targeting, automotive and thermography sectors. 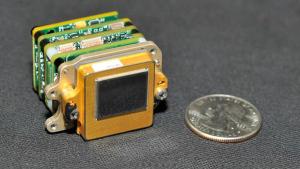 "All of the similar 640x480 competitive offerings we researched listed 30 fps in their product specifications," commented Christian Rodriguez of BAE Systems. "Achieving 60 fps is the result of having an experienced and highly capable read out integrated circuit (ROIC) design team, and an innovative electrical design team with a great handle on working with low power and low noise components."

Sixty frames per second will suit a growing market for thermal imaging in mobility applications, such as goggles and driving aids, where a smooth video output is critical. Slower video can lead to disorientation and motion sickness in these kinds of scenarios.

"Prior to the introduction of our solution, the alternative thermal camera core options that offered 60 fps were only available in significantly lower resolutions, diminishing the utility of the sensor," said Rodriguez. "This forces a decision between smooth video and field of view/range. We give users the best of both."

A fast frame rate also enables finer tracking of detail in a scene and expands the potential pool of applications to include areas such as machine vision and automation. One potential barrier for all such applications is inevitably economics, however, with cost likely to remain an important consideration.

"Costs will come down as global adoption of thermal sensors accelerates," noted Rodriguez. "Technology breakthroughs like ours are vital to expanding the range of viable applications for thermal sensors, which in turn will expand production volumes and drive down costs, further accelerating adoption."