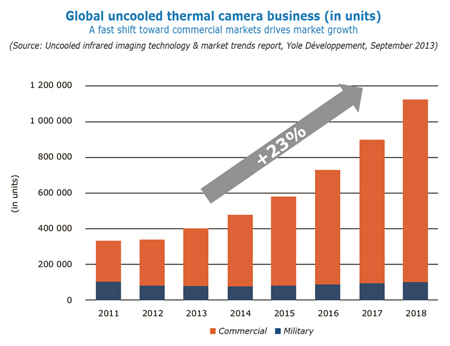 Hot market: The global uncooled thermal camera business is set to take off.

A decline in the military market for uncooled infrared imaging technologies has created a shift toward commercial businesses faster than expected and will continue because of established and new consumer applications such as personal vision and smartphones. These are some of the conclusions in the latest report on the sector by analyst Yole Développement, Lyon, France.

The report contains in-depth analysis of both established and emerging markets. Yole also details the business strategies of the key players in uncooled infrared imaging sector, and presents an analysis of the status of current and likely future infrared imaging technologies.

Overall, the global uncooled infrared camera market experienced a sharp downturn in 2012: although total shipments slightly increased by +1%, total revenue fell by 12% to around $1.8 billion. This steep fall was mainly due to the weakness of the military market which has been historically the main revenue generator.

Heavy cuts in the US military budget, resulting from federal budget sequestration and reduction of military operations have had a massive impact on the global military market. US Department of Defense program delay consequences were notable because the US market accounted for more than 80% of the global military market in 2011. This sharp decrease was partly compensated by the commercial markets which grew by +11% in unit sales due to the surveillance and thermography markets.

This shift toward commercial and higher volume markets will be confirmed over the 2013-2018 period. Yann de Charentenay, Senior analyst at Yole Développement, commented, “We are expecting 23% growth in shipments fueled by four key commercial markets showing a CAGR above 20%: automotive, surveillance, the young ultra-low-end thermography market, and finally by the rise of infrared imaging in smartphones.”

Although 2012 sales were “disappointing”, he predicts that the automotive market will be the leading growth driver for associated even if sales remain limited to premium cars until 2017.

In a similarly pattern to automotive, sales growth of IR imaging surveillance applications was below expectations in 2012 because this market took longer than expected to develop. However, the "sensational" introduction of affordable sub-$2,000 cameras initiated by DRS and followed by FLIR in 2012 should boost sales.

The thermography sector’s market growth is being driven by the ultra-low-end market which consists of low-resolution cameras for basic radiometric purposes, reaching a price point low enough to be adopted by technicians or DIY consumers. It is expected that ultra-low-end will generate nearly half of the total thermography market in 2018 even though it emerged at the end of the last decade.

Yole further expects that the ultimate high-volume application will be infrared imaging for smartphones benefiting from their large display to control a plug & play IR camera. An additional scenario envisions a rapid ramp up of this application based on huge price erosion.

Growing volumes and price erosion increase cost pressure on sensor and camera manufacturers: what is the best strategy to reduce cost? Yole believes that the military market downturn and high price erosion have deeply affected traditional infrared imaging players for the past few years. Low-end applications now drive overall growth, requiring greater cost reduction: in addition to technological developments to reduce material cost, economies of scale have become a key competitive advantage. Thus, FLIR, the market leader, and many players at both sensor and camera levels try to target as many commercial markets as possible to aggregate volumes.

At the sensor level, major manufacturers (such as DRS, FLIR, Raytheon, ULIS, GWIC) have now moved to 8in production lines instead of 6in to reduce wafer manufacturing cost. Several have even outsourced their production to foundries to further reduce production cost. These two elements are preliminary signs of a strong microbolometer cost reduction that will open up cost driven applications such as smartphones.

At the camera level, vertically integrated players, with internal sensor manufacturing, can benefit from their efficient cost structures to enter any commercial market with an aggressive camera price point: for instance, DRS and FLIR lead the price war in surveillance while FLIR has introduced a low-cost infrared camera for firefighting in 2012. This represents a major advantage for vertically integrated players because they can leverage high volume manufacturing that the single market cameras specialists cannot.

Secondly, decreasing the sensor die size is another cost reduction factor. As a consequence, a race toward shrinking pixel pitch is on-going. All microbolometer manufacturers focus on developing a 12μm pixel architecture, improving sensitivity enough to reach the 50mK target.

Finally, the last trend in uncooled infrared imaging fits the need for low-cost and low-resolution sensors. As the low-end market expands, the stress on sensor resolution relaxes and business opportunities open for affordable low-resolution sensors. As a consequence, low-cost technologies such as pyroelectrics, thermodiodes or thermopiles are likely to successfully be introduced in the market and will be relevant competitors to new low-resolution microbolometers. For this reason, Fluke acquired Irisys in 2012 to secure the supply of pyroelectrics arrays used in its new generation of “infrared thermometers”.