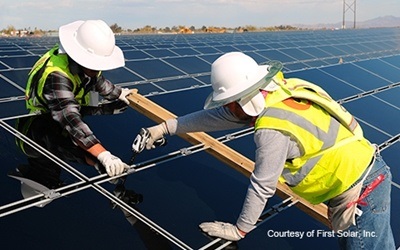 Nearly a gigawatt of solar photovoltaic (PV) generating capacity was added to the US electrical grid during the second quarter of 2013, according to the latest report from market analyst NPD Solarbuzz.

That figure represented an increase of 24 percent from the opening quarter of the year, with California responsible for more than half of the additional capacity.

Finlay Colville from Solarbuzz said that some 521 MW of new PV was installed in the state, a new record high for PV added by any state in a single quarter.

“California has added 1.6 GW in the past 12 months, with a further 1.1 GW forecast for the second half of the year,” reported the analyst, who said in July that cumulative PV installations in the US had topped 10 GW.

Utility projects accounted for 59 percent of the latest quarterly demand, with the remainder split between commercial and residential installations.

Examples of recent large installations include ground-mounted solar “farms” backed by Pacific Gas & Energy (PG&E) such as the 250 MW California Valley Solar Ranch and the latest phase of the 550 MW Topaz Solar facility, both of which are located in San Luis Obispo County.

Other major projects include phase two of Antelope Valley Solar Ranch near Los Angeles and, in Arizona, the Agua Caliente plant and the first phase of Sempra US Gas & Power's Copper Mountain Solar 2. 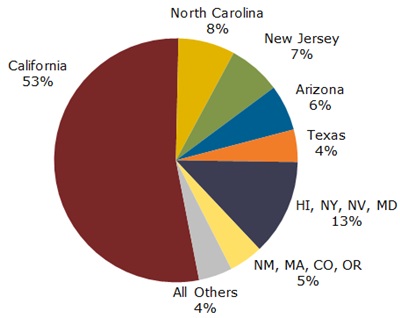 North Carolina next to boom
For the US overall, Solarbuzz is predicting even more PV installations in the current quarter, with just over 1 GW set to be added. During the second half of this year, Arizona and North Carolina are together expected to add 400 MW, along with another 500 MW from a combination of New Jersey, New Mexico, New York, and Texas.

Outside of the more established markets in the US, North Carolina is shaping up to be a key location, with 285 MW set to be installed this year in total. Year-on-year, that would represent growth of 80 percent, with further growth of 30 percent predicted in 2014. Strata Solar, the leading solar project developer in the state, has completed nearly 100 MW of projects over the past year.

Despite its strategic move towards unsubsidized markets, First Solar is still the leading PV module supplier in the US by some distance, with a market share of 22 percent. Next comes Total-owned SunPower with 12 percent, with four Chinese suppliers including troubled Suntech taking the next four spots and a collective 27 percent of US market demand.

US market to beat 4.2 GW
For the US overall, Colville is expecting PV demand to reach 4.22 GW this year, equivalent to annual growth of 17 percent and out of a total anticipated global deployment of around 35 GW. Next year, the US figure should rise to 5.3 GW, and over the next five years the US should account for around one-fifth of all new PV installations globally.

The analyst is confident of that market trajectory, citing a pipeline of commercial and utility projects that now exceeds 44 GW. That total includes more than 2,300 different projects of 50 kW or higher, with commercial applications accounting for more than half of the total.

Last month, rival forecasting firm IHS said that First Solar would become the first engineering, construction and procurement (EPC) company to install more than a gigawatt of PV generating capacity in a calendar year, and was on course to install 1.1 GW in 2013.

First Solar’s strategic move to become an EPC firm rather than simply a module and panel supplier has paid dividends over the past couple of years as module prices in particular have collapsed.

While much of that capacity has been installed in the US market, First Solar is working to diversify its geographical base beyond North America into particularly sunny locations such as Australia, the Middle East and North Africa.