General lighting LED lamp sales taking off in US and APAC

Although unit prices will drop off, both markets set for absolute growth over next 5 years, says analyst. 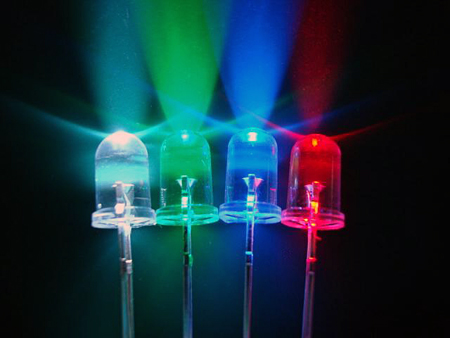 Sales volumes of general lighting LEDs will flourish over next five years.

Consumption of LED lamps in the United States totaled $891 million in 2012, according to a new market report on “general lighting LED lamps” from ElectroniCast Consultants, Aptos, CA, USA. The firm forecasts that the consumption value in this territory will reach $2.77 billion in 2017, representing an average annual growth rate of 25.5% (between 2012-2017).

In another, simultaneously-released study, ElectroniCast considers the prospects for general lighting LED lamp sales in Asia-Pacific markets (APAC), which it says reached over $1.45 billion in 2012 alone. Looking ahead, APAC’s consumption value of such LED lamps is set to increase with strongly rising quantity growth partially offset by declining average prices, in the same pattern as in the USA

The market study breaks out the forecast into eight major lamp types: parabolic aluminized reflector (PAR), general service (Type A), decorative, multifaceted reflector (MR) compatible, tube, street-lights, high-bay, and specialty flood lighting. The lamp categories, in turn, may have multiple sub-categories, which are determined by physical size of the lamp. 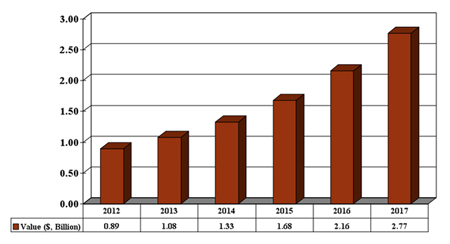 US consumption value of LED lamps in general lighting will reach $2.77 billion in 2017.

“Even though we are forecasting very steep average selling price declines for the LED-based high bay lamp, we predict the category to increase at nearly 20% per year in value,” he added.

LED-based general service lamps, such as “A-19” lamps are forecast for annual growth of over 30% as households find alternative lighting sources to the incandescent bulb. Also, LED-based linear (tube) lamps, which are emerging as a competitor of fluorescent tubes, are forecast to reach a consumption value of over $150 million in the year 2017.

The primary appeal of LED street lighting is energy efficiency compared to conventional street lighting fixture technologies. According to ElectroniCast, the number of LED-based streetlights deployed in the United States will increase at an annual rate of over 40% between 2012-2017; however, as is often seen in these LED forecasts, the average selling price is predicted to drop dramatically over the forecast period.

The commercial and industrial user category is forecast to dominate in terms of relative market share during the 2012-2017 timeline; however, both the government and the residential segments are forecast for faster annual growth.

APAc's commercial/industrial LED lighting markets will be dominant through 2017.

The APAC report points out that the increasing automatic assembly and test manufacturing process for selected LED solid-state lighting products allows for mass-production capability. In addition, over the next few years, the average selling prices of the SSL general lighting products will be driven lower, as a result of production efficiencies, yield improvements aided by quality controls, competition, marketing/sales distribution improvements, and other factors.

The consumption value of LED-based tube lamps for general lighting in APAC was $75.08 million in 2012. The longer tube lamps (1.2m-plus) are forecast to dominate this particular product category. Longer lamps typically have a higher average selling price, but Electronicast says that even in terms of volume, the longer linear tube lamps will command the lead sales position.

Consumption of LED-based general service lamps used in general lighting applications in APAC was $360 million in 2012 and will reach $1.69 billion in 2017. The market forecast is also segmented by A-15 and the top-level data for the A-19/Other Type A lamps.