Solarbuzz sees demand in China and Japan doubling in the second half of the year. 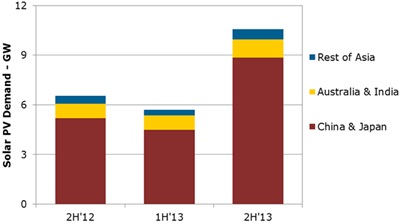 PV demand in the Asia-Pacific region

PV demand from the Asia-Pacific (APAC) region will exceed 16 GW this year, up a remarkable 90% year-on-year, and will account for more than 40% of total photovoltaic demand around the world.

Those are two key findings in the latest PV market report from analysts at NPD Solarbuzz. And with the great solar "shake-out" finally nearing an end, they say that the current period marks a turning point for the industry.

Finlay Colville from the company says: “The record level of PV shipments to China and Japan coincides with corporate margins returning to positive territory and the final shake-out phase of uncompetitive manufacturers nearing completion.”

Combined with the trade deal between China and Europe, the change in sentiment from the pessimistic tone at the start of this year is vivid. “Having entered 2013 with a highly cautious outlook, tier-one suppliers are poised to exit the year with restored confidence, ahead of optimistic shipment and margin guidance for 2014,” Colville added.

China is set to take over from Germany as the largest single market for PV deployment in 2013, stimulated by government plans to develop the distributed generation segment through rooftop installations.

But Solarbuzz adds that bottlenecks related to project financing and grid accessibility for solar farms will also be resolved in the country, with the result that the remainder of the year will see strong ground-mount deployment from China Power Investment, China Guangdong Nuclear, Three Gorges Group, and other utility developers.

Meanwhile, and coincident with fresh concerns about nuclear power due to recent events in Fukushima, Japan has been the most active PV market this year. It is set to experience year-over-year growth of 150% in 2013, with the majority of demand in the second half expected to switch from residential installations towards commercial and utility segments.

Elsewhere in Asia
Outside of those two major markets, which will together account for more than 80% of all Asian deployments in 2013, developments are still being held up. In Australia and India, PV demand is being affected by policy disruptions.

India is subject to delays relating to the second phase of the country’s National Solar Mission, the ongoing anti-dumping case, and the prospect of a cut in feed-in-tariff payments. In Australia, forthcoming elections and uncertainty over the future of the carbon tax and the country’s Renewable Energy Target have put the market on ice.

Exactly how long the market expansion in Japan can continue also remains an issue, with the prospect of installation caps next year.

“End-market growth in China and Japan has become essential to support domestic manufacturers and project developers, in addition to contributing to renewable targets,” said Colville. “However, we do not yet know how far the subsidies will be reduced during 2014 or how much capacity can be added before market caps on annual PV installations will become necessary.” 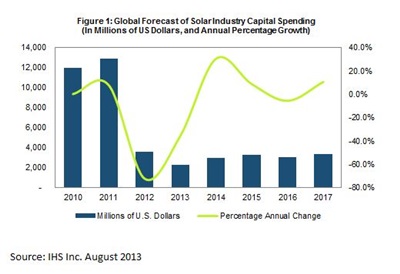 The last time there was a year-on-year increase in such spending was 2011, and since then investment in key equipment, including lasers, has plummeted because of the massive overcapacity in the industry.

IMS’ figures show that capital spending plunged by a remarkable 72% in 2012, and is set to fall another 36% this year. That will mean 2013 capex spending of just $2.3 billion. And while the rise of 30% in 2014 will be welcome to the beleaguered suppliers that have survived the shake-out, spending of around $3 billion will still be way below the level of $13 billion witnessed in 2011.

The good news is that capex spending should then increase much more steadily, with modest growth through 2017, and that much of that outlay is set to be spent on improving cell and module efficiencies – likely to mean good news for laser suppliers.

“Our research is showing a return to market equilibrium with regard to supply and demand,” said IMS solar industry analyst Jon Campos. “Overcapacity seems to be correcting itself, and from the last few financial announcements, a handful of solar companies have returned to profitability and widened margins. The last piece of the recovery puzzle is capital spending and investment in high-efficiency technology.”

While recent history in the PV industry had been dominated by the proliferation of “me-too” providers of near-identical cells and modules, the industry is now entering an era where product differentiation and greater efficiency will be the keys to success.