But investors in the image sensor manufacturer remain disappointed by thin profits. 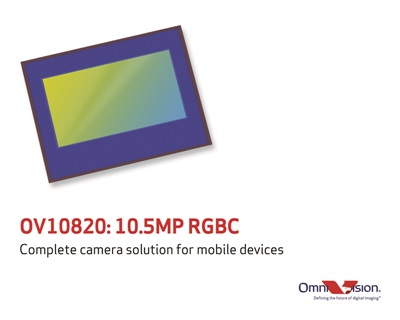 OmniVision Technologies, rated as the world’s largest supplier of CMOS image sensors, has reported a surge in sales and a swing to net profit.

For the quarter ending July 31, the Santa Clara-headquartered company, which uses third-party manufacturers to make its products, posted revenues of $373.7 million - up a remarkable 45% year-over-year.

While pleased with the sales hike, CEO Shaw Hong said that a slowing market for smartphones in July “intensified competition”, and stopped the company from delivering a planned improvement in gross margins.

Nevertheless, OmniVision did post an operating profit of nearly $17 million, compared with a small loss this time last year. Combined with a tax benefit, that translated to a net profit of $23.1 million for the latest quarter.

As one of only a handful of image sensor providers large enough to service a sizeable chunk of the mobile handsets market, OmniVision is inevitably prone to severe swings in demand – and is striving to diversify its applications base as a result.

One area where it appears to be gaining some ground is in the automotive industry, where there are strong expectations of new camera applications.

Hong told an investor conference call: “We believe we have gained market share at North American, European and Japanese automotive OEMs for both surround-view, as well as rear-view camera applications.”

“Our 720p high-definition and one megapixel sensors are shipping in volume production in multiple models for several luxury automotive OEMs.”

Next up: smart watches
The company shipped a staggering 208 million units in the latest quarter, of which approximately two-thirds ended up in mobile phone handsets. Less than 10% of the company’s output currently winds up outside of the consumer electronics space.

And while automotive and medical applications could help that diversification, more and more consumer devices are set to come on stream too. “Gesture recognition has the potential to significantly expand the market opportunities for cameras in existing and new consumer devices,” said the CEO.

“Another potential new market opportunity for image sensors is based on wearable technologies,” Hong added. “These technologies [are at] a very early stage of adoption, [but] we are seeing interest from an increasing number of OEMs for wearable applications such as glasses, pens, and smart watches."

“Wearables like smart watches are being developed by top OEMs and we believe an imaging solution would be required in these devices. While it is too early to tell how much volume the wearable segment will drive, we believe OmniVision is well positioned to capture the growth opportunity.”

For the current quarter the company is expecting to post revenues of between $375 million and $410 million, but margins are likely to remain weak amid the ongoing competitive environment and OmniVision's stock dropped in value by 12% in pre-market trading following the results announcement and forecast.