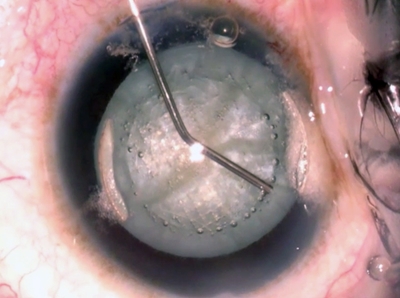 The global healthcare giant Abbott is set to acquire OptiMedica, the California company that has developed a femtosecond laser system for cataract surgery, in a deal worth up to $400 million.

The agreement is the latest in a series of buy-outs focused on laser cataract technology. It follows the recent €450 million re-acquisition of Technolas Perfect Vision by Bausch + Lomb, and the $744 million deal signed by Alcon and LenSx Lasers back in 2010.

One key difference with OptiMedica’s “Catalys” system is that it features an integrated optical coherence tomography (OCT) function that is used to image the anterior chamber of the eye.

Major trial
Last month, OptiMedica announced that Catalys, which already has clearance from the US Food & Drug Administration (FDA) and CE Mark approval for use in Europe, would be deployed across medical facilities in France as part of a 2000-eye clinical study to compare the efficacy and cost-effectiveness of femtosecond lasers with conventional cataract surgeries.

Abbott will acquire the company for $250 million, net of cash, with additional payments totaling up to $150 million upon completion of certain business milestones.

Like rival systems developed by Technolas, LenSx and LensAR, OptiMedica's Catalys sytem is designed to replace some of the more technically demanding manual steps that are currently used in cataract surgery with the high precision and cold ablation that is characteristic of a femtosecond laser pulse.

The OptiMedica system is cleared for use in the key stages of anterior capsulotomy and phacofragmentation, and can also be used to make a variety of incisions during ocular surgery.

Ageing population - more cataracts:
As the global population ages, there is the widespread expectation of a steadily rising demand for vision care technologies, especially among the emerging middle classes in developing nations with high populations.

According to a recent analysis of the cataract surgery market by MarketScope, nearly 22 million cataract surgeries will be performed this year. The same report adds that the average age of a cataract patient is between 65 and 70, and notes that approximately 12 percent of the global population is now aged 60 or older.

Although it did not previously have a femtosecond laser product in this area, Abbott is already a key player in the cataract segment, thanks to its line of monofocal, multifocal, and toric intraocular lenses (IOLs), used to replace the damaged lenses that are removed from the eyes of cataract patients.

That existing global presence ought to give the OptiMedica system a very strong marketing position versus its rivals, with the added benefit of the three-dimensional OCT imaging platform.

Abbott says that the imaging technology helps surgeons to accurately prepare the patient’s lens capsule for precise subsequent positioning of the intraocular lenses.

High-profile investors
The companies say that the transaction should close by the end of the year, assuming that customary closing conditions and anti-trust clearances are gained by then.

Some high-profile venture investors currently own a stake in OptiMedica, including Kleiner Perkins Caulfield & Byers, and BlackRock. In its first two rounds of financing, led by Kleiner and Alloy Ventures back in 2006, OptiMedica raised $13.8 million.

Brook Byers, of Kleiner Perkins Caulfield & Byers fame, has acted as the chairman of OptiMedica’s board of directors since his venture investment, and said at the time of the latest round of financing:

“The rapid worldwide adoption of Catalys is not only a direct result of the system’s unparalleled performance but also of the amazing talent and unique Silicon Valley culture that you’ll find at OptiMedica.”

He added: “This is a company with a proven track record of delivering innovation that transforms existing standards of care. We are very enthusiastic about OptiMedica’s long-term prospects to lead the field of cataract surgery and continue to drive better results for cataract surgeons and their patients.”