LED chip and component maker loses a fifth of its value as losses mount up. 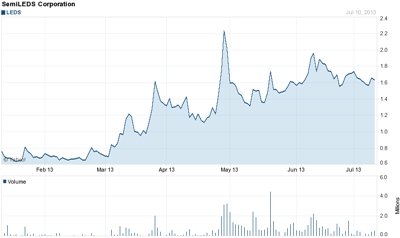 SemiLEDs, the Nasdaq-listed LED manufacturing company with headquarters in Taiwan, has posted widening losses in its latest quarter – sending the struggling company’s stock crashing by 20 per cent.

The firm reported sales of only $3.5 million in the quarter ended May 31, down from $9.2 million a year ago. That resulted in a negative gross margin, and translated to an operating loss of $9.8 million – worse than the $8.0 million operating loss reported a year ago despite drastic action to slash spending on research and development and other operations.

“Unfortunately the combination of a series of one-time events greatly impacted our business performance this quarter,” CEO Trung Doan told investors. “Despite this brief set-back, we remain confident we have the right strategy in place, focusing on profitable market segments where the performance and quality of our products continues to differentiate us.”

Chip obsolescence
That combination of events included the sale of obsolete inventory at very low price levels, essentially cannibalizing potential revenues from SemiLEDs’ newer products, as well as a dip in demand from the firm’s customers in eastern Europe, problems caused by the Cyprus banking crisis in March and the failure of a chip in one qualification test for a camera flash application.

Doan is hoping that a potentially large customer for the camera flash application will complete product qualification in the next few months, with revenues starting to come in during the November quarter.

SemiLEDs is also hopeful of generating sales from its new series of ultraviolet LED products, designed with a 20-30 degree beam angle for applications which require more directed and concentrated light in a smaller surface area, such as counterfeit detection and cosmetic retail markets.

But ahead of that will be another tough quarter for the company, with management expecting sales of no more than $4 million during the three months ending in August, and a net loss of between $7.6 million and $7.9 million.

That will put another dent in SemiLEDs’ cash balance, which as of May 31 stood at $41.4 million, with no additional short-term investments.

In early trading on the Nasdaq following the company’s investor conference call, SemiLEDs’ stock price dropped in value by around 20% to trade at $1.30, equivalent to a market capitalization of $35.3 million.