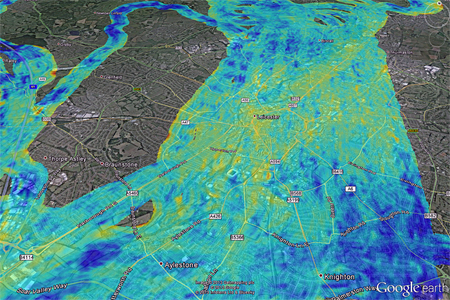 Yellow alert: Image showing relative levels of NO2 across Leicester.

Scientists at the University of Leicester, UK, have installed their groundbreaking pollution-detecting technology in an airplane to map air quality around the city. The physicists used their sophisticated air quality measuring spectrometer to produce distinctive images of pollution levels in Leicester as part of the Airborne Air Quality Mapper (AAQM) project.

The images show how levels of nitrogen dioxide (NO2) vary around the city – revealing the differences in air quality between green, wooded areas and busy road junctions and areas of industry. The results could help draw attention to polluted areas – and help inform future environmental planning decisions.

As part of the process of developing advanced solutions to the growing pollution problem, scientists at the University’s Earth Observation Science group, based in the Space Research Centre, have used their world-leading Compact Air Quality Spectrometer (CompAQS) device to map air quality around the city.

The Leicester device monitors visible light – and measures how much light is lost at specific wavelengths that are absorbed by NO2. Development of the instrument took place with partner Surrey Satellite Technology and was funded by the UK’s Centre for Earth Observation Instrumentation and the Natural Environment Research Council. The instrument also forms a part of a major initiative to improve the UK’s technological leadership in space instrumentation for Earth Observation.

The team have previously used the device as part of the CityScan project – involving several spectrometers placed on tall buildings, which are being used to build a 3D map of pollution across a city. They have deployed CityScan to measure pollution in Leicester, Bologna, and London during the Olympics.

The technology was this year adapted to be used in aircraft – allowing researchers to view the pollution levels beneath them. In February 2013, the scientists mounted their spectrometer on the bottom of an aerial survey plane and flew over the city. The device gave a reading for NO2 levels between the ground and the plane – which was flying at around 900m. Each reading corresponds to a strip measuring 6mx100m at ground level.

They collated all the readings, and overlaid the results on Google Earth – giving a detailed map of air quality in the city and surrounding areas. Particularly clean areas of the city – indicated by the darker blue spots on the map – include Knighton Park, Oadby Race Course and Western Park Golf Club. More polluted areas – shown in red and yellow – include Leicester train station, and traffic hub St Nicholas Circle, and the nearby M1 (freeway) intersection.

The researchers hope to carry out further flights with industrial partners Bluesky International, a UK-based specialist in aerial imaging and remote sensing data collection and processing. In time, they hope to be able to adapt the technology to use on spacecraft in order to monitor pollution levels across the whole planet. 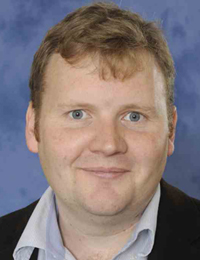 Project leader Dr Roland Leigh, of the Earth Observation Science group, said: “This is the first time in the UK anyone has been able to use airborne devices to map pollution levels across whole cities. This information really helps us understand the sources of pollution within cities, and the human exposure downwind. We are hoping to do carry out further flights as part of the Airborne Air Quality Mapper project – and are looking for potential collaborators and customers.”

In an interview with optics.org, Leigh explained more about the airborne scanning technology and how he is hoping to develop it: “One of the things that we pride ourselves on here is developing the whole package from the hardware – over the past five years – right through to liaising with the local authority.

”The University of Leicester adapted the optical system design from Surrey Satellite Technology. We also put the detector itself together, which was originally based on X-ray technology, but we adapted that into a visible spectrometer with our own optics, sensor and power unit. And all of the spectroscopic analysis is done in-house.

“At the moment our system can give an indication of poor or good concentration of NO2. But what we would like to move into in the future is to develop a system that could indicate more detailed volume/mix ratio information and perhaps sensitive enough for legal purposes in the case of pollution infringements.”

”Our spectrometer operates in the blue visible range between 420-490nm, with about 0.7nm resolution. We use this range because it is the absorption region for NO2. However we are looking at the possibility of developing other models to cover SO2. We would need to work in the infrared to look at organics. In good conditions the device has an effective range of up to 10km but if the atmospheric conditions are poor, that can drop to 100m or so.”

Dr James Lawrence, Research Associate in the Earth Observation Science Group, developed aspects of the AAQM instrument and flew with it during its test flight. He commented: “We have a world-first spectrometer which shows where the major emissions of nitrogen dioxide are occurring – typically in industrial or heavy traffic areas.

“It is important to note that the measurements do not necessarily relate to the pollution levels at ground level only – each reading takes into account the amount of NO2 at all altitudes between the ground and the plane.”

James Eddy, technical director at Bluesky, added, “We are thrilled to be involved with such a ground-breaking project, which is pushing the boundaries of ‘real science’. The air pollution sensor will really help to help make our cities better places to live in the future.” 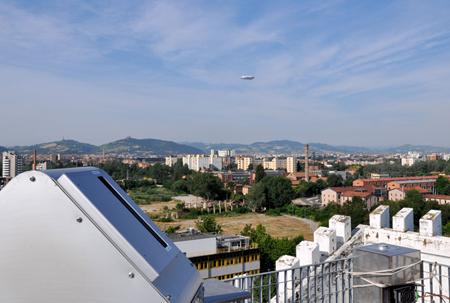 It is thought that at least 90-95% of atmospheric NO2 is produced by traffic emissions in urban environments, which can cause health problems – including increased risk of respiratory illnesses such as heart attacks and bronchitis.

The European Commission is pressing the UK Government to find a solution to the problem of NO2 in large cities across the country. Large fines may be imposed and new legislation allows these to be passed down to local authorities that fail to take prompt action to improve their air quality.

While not among the worst-affected cities, Leicester City Council is in the forefront of developing local and national solutions to this problem through collaborative projects with the University of Leicester and DEFRA. The aim is to develop smart traffic management schemes and reduce vehicle emissions.