Series E round will support further development of architectural glass that responds to its environment. 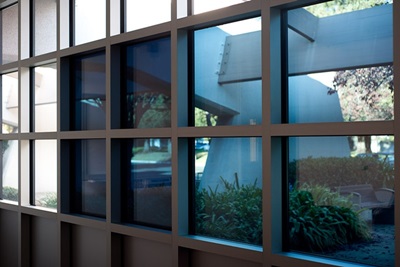 California start-up View, Inc., which is developing electrochromic glass for architectural applications, has raised $62 million in a “series E” debt and equity funding round for the firm previously known as “Soladigm”.

The latest funding, which follows previous efforts that have raised upwards of $140 million in a combination of equity, debt and grant allocations, was led by glass giant Corning, and the two firms will work together closely to commercialize the energy-saving technology.

Corning’s executive VP and “innovation officer” Martin Curran said in a joint statement: “While dynamic glass has been in development for decades, we believe View’s unique approach will finally bring this technology into the mainstream.”

“We believe the precise surface attainable through our fusion glass process combined with View’s leading expertise in dynamic glass technology help us develop an innovative glass that can make dynamic windows a bigger part of exterior architectural applications,” Murray added.

Meanwhile View’s CEO Rao Mulpuri said: “This relationship is significant not only because of the investment Corning is making in the success of View and dynamic glass, but also because of the benefits of shared brain trust and the potential to significantly advance the capabilities of both companies.”

Founded originally as “Echromics” in 2006, Soladigm switched its name to View in November 2012 – perhaps wishing to distance itself from any negative connotations with the struggling solar photovoltaics industry.

Its technology is similar in principle to the way in which photochromic sunglasses become tinted in bright sunlight. But instead of reacting directly to sunlight, the opacity of the glass is controlled electrically, thanks to a coating deposited onto the glass. The technology, which was originally developed at the Lawrence Berkeley National Laboratory, allows sunlight to heat up buildings on a cold but sunny day, and helps to keep them cool during the summer by applying the tint.

Patent battle looms
But View is not the only company working on the approach. SAGE Electrochromics, which was founded back in 1989, uses glass that is sputter-coated with five layers of ceramic materials to achieve the same effect.

In fact, some of the new funding attracted by View may end up being used to fight patent litigation between it and SAGE. In December 2012, SAGE filed a lawsuit claiming infringement of two US patents by View (US 5,724,177 and US 7,372,610).

The ‘177 patent, which identifies SAGE CEO John Van Dine as co-inventor and was awarded in 1998, describes a way to minimize optical interference between the layers of the glass structure, and therefore to maximize uniform optical transparency.

It also covers the use of thin conductive metal layers in place of transparent conductive oxide layers, which is said to reduce the overall thickness of the materials and ease their manufacture.

"We have worked for more than twenty years to bring our patented electrochromic glass to market,” said Van Dine at the time the lawsuit was initiated.

Initially, View responded to the litigation by saying that it did not infringe the SAGE patents, and then following up with a counterclaim of its own, based on the approach described in its US patent 8,243,357.

Filed much more recently, in May 2011, the ‘357 patent describes a way to reduce the number of defects in electrochromic glass, using a physical vapor deposition process.