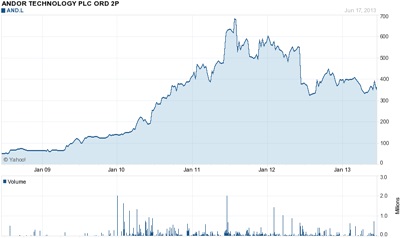 A trading update from Andor Technology, which develops and manufactures high-performance scientific cameras for academic, industrial and government applications, has seen the stock value of the company slump by one-fifth.

In a statement to the London Stock Exchange (LSE) on which it is listed, Belfast-headquartered Andor said that although its first six months of fiscal 2013 were in line with prior expectations, it was now cutting its forecast for the second half. The company’s fiscal year ends in September.

“We stated in our trading update of 3 April 2013 that our order book had strengthened due to strong performance in our OEM segment,” announced the firm. “We also said that draw-down against the OEM order book was less than expected and we anticipated this would improve during the second half of the year.”

“Since 3 April 2013, market conditions have remained challenging, specifically in relation to the availability of funding to support scientific research. The biggest impact is being felt in the higher price point instrumentation market serviced by our OEM customers, and to a lesser extent our own systems business.”

OEM segment down
Although OEM order intake will show a 6% increase in the first half, Andor now expects its full-year sales to decrease by £4 million on last year in its OEM segment across both physical and life science customers.

Despite that, the company pointed out that its cash generation remains strong, and that it still has more than £21 million available to invest. “We continue to invest internally in research and development and look for acquisition opportunities that will further enhance our growth plans,” said Andor.

It added: “Our market position remains strong and while the current conditions represent a revision to our growth plan, we remain focussed on initiatives to deliver our long-term growth strategy.”

Back in late 2011, Andor set out its plans for rapid expansion, armed with £18 million of new investment as it looked to grow beyond specialist high-end applications and capture a share of the much larger market for mid-price cameras.

At the time, company CEO Conor Walsh said: “Our ambitious strategy for growth over the next five years now includes acquisitions and targeting new market sectors.

With sales from its mid-range camera portfolio said to be up 24% year-on-year in the six months ended March 31, the company does appear to be having some success with that diversification strategy.

Andor is set to provide further details next week, when it is scheduled to issue its interim accounts.

Shortly after the latest update, Andor’s stock was trading at around 295p on the LSE, down nearly 20% from the prior day’s close of 362.25p and its lowest valuation since July 2010.