Valeant Pharmaceuticals will buy the ophthalmology giant for $8.7 billion, thanks to massive Goldman Sachs loan. 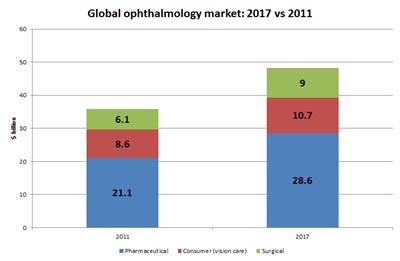 A huge loan from Goldman Sachs will be used to acquire Bausch & Lomb and its substantial debts for $8.7 billion, six years after the ophthalmology giant was purchased in a leveraged buyout valued at $4.5 billion.

Warburg Pincus, the private equity group that acquired the historic company – founded back in 1853 as a small optical shop in Rochester, New York – in October 2007, has in the meantime loaded Bausch & Lomb with a debt now exceeding $4 billion.

The group had looked set to try and recoup its outlay through an initial public offering (IPO) of stock until Canada-headquartered Valeant Pharmaceuticals International stepped in with a multi-billion-dollar offer that will see Warburg Pincus cash in more rapidly, thanks to the historically low interest rates on offer.

The private equity group had already cashed in more than $772 million in March, via a dividend payment that was, inevitably, paid for by yet another loan – one that the planned IPO had originally been earmarked to repay.

Of the $8.7 billion purchase price agreed with Valeant, $4.5 billion will go to Warburg Pincus, with the remaining $4.2 billion used to repay the outstanding debt. When the private equity group purchased Bausch & Lomb in 2007, the ophthalmology company’s debt stood at $830 million.

Debt pile
Valeant already has a large pile of debt on its own balance sheet, thanks partly to a series of recent acquisitions. The company’s latest quarterly filing, dated March 31, listed $413 million in cash and equivalents versus a whopping $10.3 billion in long-term debt.

Interest payments of $155 million on that debt in the March quarter represented nearly 15% of Valeant’s $1.07 billion revenue, and completely wiped out the firm’s operating income of $117 million.

Some of Valeant’s debt was accumulated late last year when it acquired the dermatology and aesthetic drugs firm Medicis in a cash deal valued at nearly $2.6 billion. That was financed by three separate low-interest convertible loan notes, two of which do not mature for 20 years.

Medicis was followed by another cash acquisition, this time of Obagi Medical Products, for $440 million – with the deal completed just a month ago.

Valeant says that it will finance the $8.7 billion Bausch & Lomb acquisition partly by issuing up to $2 billion in new equity, with the balance to be provided by Goldman Sachs in the form of bank debt (55%) and bonds (45%).

The deal is expected to close in the third quarter of the year, and will see several of the ophthalmology company’s executives join Valeant, including company chairman Fred Hassan and chief medical officer Calvin Roberts.

Ophthalmology: growth market
Valeant expects the ophthalmology market to grow at a healthy compound annual rate of 5% through 2017, driven partly by the ageing global population and increased incidence of diabetes. According to figures from McKinsey, the market is set to reach $48.3 billion by then - of which $9 billion is anticipated to relate to surgeries.

In an investor call to discuss the move, Valeant expressed a desire to focus less on early-stage research and more on lower-risk development work. It will also look to cut costs, and has already earmarked “at least $800 million” in so-called synergies.

But the financial struggles of TPV were highlighted in a recent financial report by Ernst & Young, with the auditors stating that the firm would need additional financial support to remain a going concern this year after posting a significant loss in 2012.

Whether or not TPV will fall within the sights of Valeant’s future cost-cutting measures remains to be seen. In its investor presentation on the Bausch & Lomb deal the company did highlight the Victus platform - though, bizarrely, it was referred to as a “fermatosecond” laser system.

With both boards of directors having already approved the merger, Bausch & Lomb is set to become a division of Valeant once regulatory approvals are received – and the historic brand name will be retained. Bausch & Lomb’s current CEO Brent Saunders, who joined the firm in March 2010, is set to act in advisory role.