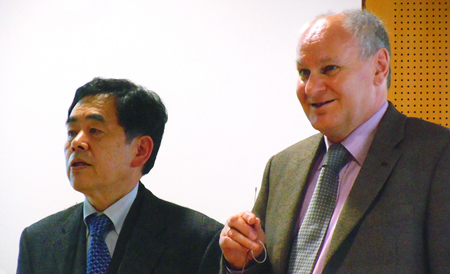 As part of the 11th International Laser Marketplace – the bi-annual industry conference staged at LASER World of Photonics in Munich – Dr Kunihiko Washio, CEO of Paradigm Laser Research (Tokyo, Japan) gave a presentation on the state of industrial laser markets and technologies in his country.

Although Japan’s laser-related markets and laser materials processing activities are quite substantial by international standards, the general flavour of his presentation was that growth remains generally sluggish to flat, with a few bright spots such as photovoltaic technologies.

Before considering the actual production and sales issues and laser-associated technologies, Washio first looked at the performance over the past five years of Japan’s end markets. These include steel-making, and automotive and electronics manufacturing industries. Generally the business activity of these sectors appears to have been flat following the global financial crisis in 2007-8. In Japan there was another notable dip in industrial production due to the earthquake and tsunami on the eastern coast in March 2011.

Since the financial crisis, the country’s overall import and export figures have steadily been rising from ¥3.5 trillion/month (both measures) in January 2009 to around ¥6.5 trilllion/month each by March 2013 (Japan Customs figures). Moreover Washio pointed out that over the same period the ¥:$ exchange rate strengthened from 120¥:$ to ¥80:$ at the end of 2012, although that ratio has since weakened to around ¥100:$ (May 2013).

Moving on to the photonics sector, Washio presented figures from the Japanese Electronics Industry Trade Association, which indicate moderate growth in Japan’s production of LEDs and solar cells (the latter more faltering). Both sectors are now achieving monthly production of around ¥15-20 billion ($150-200 million) compared with about ¥12 billion/month each in 2007. However, production of integrated circuits and liquid crystal devices have both slumped from highs of ¥350 billion and ¥200 billion/month, respectively in 2007, to today’s convergence point of around ¥100 billion/month. 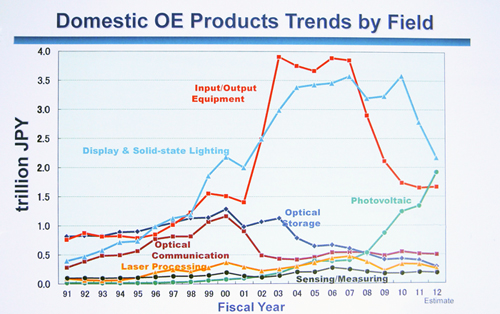 Taking a longer 20-year view (from 1992-2012) of Japan’s overall production of optoelectronics products, based on OITDA figures, Washio observed that the only sector (of seven) showing significant growth today was photovoltaic technologies, which last year achieved a production value of ¥2.0 trillion.

Production values of four other sectors reviewed – sensing, laser processing, communications and storage – had essentially remained flat across the whole two decades, though storage and communication showed some life around 2000, when both exceeded ¥1 trillion production. Displays & lighting and IO equipment had enjoyed dramatic growth to annual peaks of ¥4 trillion/year around 2007 but both of these sectors were now heading south.

Addressing Japan’s recent trends in production of laser materials processing (LMP) equipment, Washio told the conference that the 2012 production value had halved to ¥200 billion from its 2007 peak of ¥400 billion. The main laser technology employed was excimers, followed by CO2, solid state models then “others” including fiber and diode lasers. Similarly, domestic production of workhorse CO2 LMP systems considered by application area also showed slippage. Production of cutting and drilling systems, the major application area, fell by 30% between 2011 and 2012 to ¥55 billion (also down from a 2007 high of ¥90 billion). 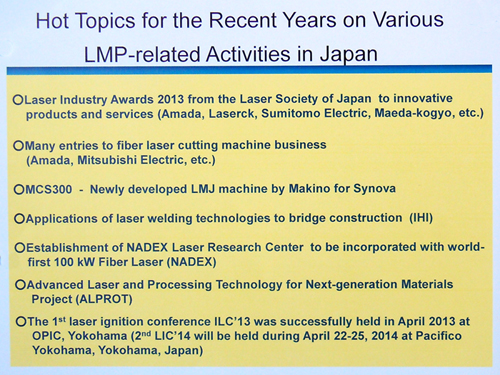 Following this generally rather unexciting set of figures, Washio attempted to lighten the mood by considering some recent positive developments within the Japanese laser materials processing sector.

These included: recent awards for innovation to Japanese LMP systems developers; the growing interest in using fiber lasers in LMP applications and the development of the NADEX Laser Research Center, which will incorporate the world’s first 100kW fiber laser.