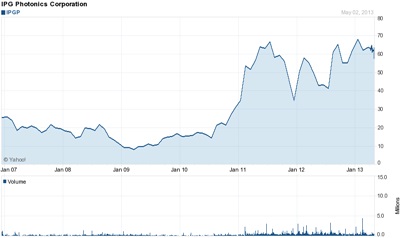 Market-leading fiber laser specialist IPG Photonics says it has just signed its largest-ever contract with a European automobile manufacturer, despite the weak Eurozone economy and accompanying dip in sales of new cars.

“Our pipeline for automotive orders is strong. In fact, we recently signed a contract with a major European auto manufacturer for 100 four kilowatt units that we estimate will be delivered over the next 12 months. This is our largest auto contract ever.”

Quarterly revenues of $141.9 million were slightly down on a sequential basis – though that in part reflects the seasonal nature of the market for high-power lasers used in materials processing.

But the company was still able to report an improved bottom line, with net income rising slightly from the fourth quarter of 2012 to reach $35.1 million.

The quarter also saw IPG ship its record-breaking 100 kilowatt laser, which is set to be used by a Japanese customer to work on new laser welding techniques for very thick samples, as well as remote welding at longer stand-off distances than is normal – something that could be highly useful in the nuclear industry, for example.

Traction control
On the automotive market specifically, Gapontsev told investors that there was still plenty of headroom for IPG to grow sales. Although IPG’s 4 kW lasers have already become something of a workhorse for advanced welding applications for North American and European car manufacturers, the CEO believes that displacement of conventional resistance welding technologies offers a huge future opportunity.

“If the transitions and use of lasers in the automotive industry for welding continue over the next few years in the vein that we expect, even this 100-unit order would represent [only] a very small part of the total opportunity,” Gapontsev said.

He added that the Germany-based firm that placed the large order already has around 80 IPG lasers in use, and has been a customer of IPG’s since 2008.

In typically bullish fashion, Gapontsev also said that IPG was continuing to push down the manufacturing cost of its high-power lasers through vertical integration – while for some of the companies seeking to challenge IPG in that space, the cost of the high-power diodes alone on the open market will make it impossible for them to compete.

“Some of the things I am actually seeing on the cost [reduction] side are fairly remarkable,” said the CEO. “And I think these [competitors] are going to find it very difficult to get close to where we are.”

The latest quarter also saw IPG add to its capabilities in the ultraviolet range, through the acquisition of Mobius Photonics.

Driving adoption
CFO Tim Mammen added that average selling prices were down overall in the latest quarter, though that this was due to IPG’s own pricing strategy to drive adoption rather than pressure in the wider market, as well as the typically deeper discounts enjoyed by volume OEM customers.

“High-power fiber lasers for cutting applications continue to be more widely accepted and are continuing to gain significant market share, and this represents a large opportunity for IPG,” Mammen reported.

“European sales increased 8% year-over-year to $45.1 million primarily driven by materials processing sales to cutting OEMs. We are pleased with the growth in Europe, which we achieved despite a challenging economic environment and lower sales for other applications.”

Despite the upbeat tone, IPG’s stock value slipped by around 6% following the quarterly results release – possibly reflecting some over-expectant investors. However, IPG remains priced close to record highs, and on May 3 was trading at $58 on the Nasdaq exchange, equivalent to a market capitalization of close to $3 billion.