by Andrew Williams
G24 Innovations, the Cardiff, UK, developer of flexible photovoltaic films that went into administration in December 2012, has re-emerged under new ownership. In March, the company reappeared under the new guise of “G24i Power Limited”, backed by a consortium of private investors.

The new investors say that they will reinvigorate the operation with a new focus on product innovation, longevity and quality. But, given the difficulties faced by G24 Innovations just a few short months ago, and the wider difficulties in the PV sector, why exactly did the consortium choose to invest in the company, and what measures will they take to ensure that history does not repeat itself? 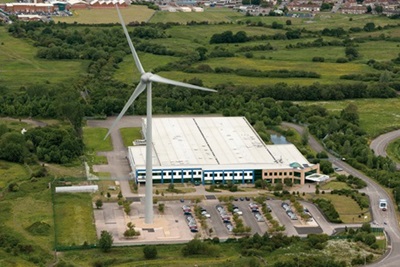 New investors
Following a solid period of growth under its previous owners initially, G24i raised more than £30 million from the likes of Morgan Stanley and energy fund 4RAE. But with PV manufacturers both large and small facing huge pricing pressures over the past couple of years, the firm was one of many to run into financial difficulties in late 2012.

The PV industry remains in the midst of a relentless shake-out, but now an investment team led by the US-based Martin family sees a future for the firm. Other investors in the venture are represented by Innovation Management Limited, an Isle of Man company specializing in investing in sustainable energy and energy conservation projects.

They have already announced their intention to resume production immediately, and provide what they describe as “substantial funding” to support G24i Power Limited’s strategic plan - which is aimed at significant improvements in product quality and cost reduction.

Asked why he took the decision to invest in the enterprise, Andrew Martin, co-director of new company alongside Israeli entrepreneur Yafim Mendiuk, says that G24 Innovations had “necessarily entered into administration due to the many financial challenges of commercialising a new technology”.

"My partners and I decided to get involved with the formation of G24i Power in order to buy the assets of the dissolved company out of administration and, because of its unique energy conservation potential, again try to make the dye-sensitized PV opportunity into a commercial success," he says.

New Business Strategy
Recognizing the ongoing struggles impacting the PV industry, Martin stresses that the business strategy of the new G24i Power will differ substantially from that of the original company.

"G24i Power is focused on investing in process improvements to substantially increase product quality [and] lifetime, improve conversion efficiencies, and reduce both variable and fixed product costs in order to offer a competitive and environmentally friendly alternative to disposable batteries in our target markets," he says.

"It is important to understand that, among other competing technologies, G24i Power's roll-to-roll (R2R) process has the best chance to produce the large volumes necessary to lower unit costs of dye-sensitized solar cell (DSSC) modules in the near future - thereby best enabling their widespread adoption," he adds.

At its core, the company's product range is based on the technology of manufacturing flexible DSSCs, or “Graetzel” cells - building on the eponymous invention of Michael Graetzel from Switzerland’s École Polytechnique Fédérale de Lausanne.

A key advantage of the technology is that it is capable of converting solar energy into electrical energy even under low-light indoor conditions - which means it can generate energy even in the absence of direct sunlight.

Graetzel has himself endorsed the re-emergence of G24. Quoted in a press release timed to coincide with formation of the new company, he said: “I am very pleased to see this technically highly successful business on a straight path to achieve commercial success. They have all the necessary technical and financial resources to do this.”

'Realistic Roadmap'
According to Martin, the multi-year effort by G24 Innovations to develop DSC PV to the point of being “nearly a commercially viable product”, but that the challenges involved ended up totally consuming their financial reserves. This time it will be different, he believes:

"G24i Power is well capitalized and is operating with a realistic roadmap and support budget for rigorously completing each remaining step as required to finish the job. We have specifically targeted those areas where we can achieve significant improvements quickly and at the lowest cost," he says.

As far as product commercialization is concerned, he highlights a planned focus on a number of key specific technologies and markets.

G24i Power will concentrate initially on opportunities in consumer electronics, a sector where the old company had previously agreed a deal with peripherals specialist Logitech, for powering iPad-compatible keyboards.

This time it is hoped that the DSSC module will be adopted in a wider variety of applications, for example in mobile phone chargers for the developing world, displays and elsewhere.