Analyst cuts stock target as earnings and sales both miss consensus estimates by some distance. 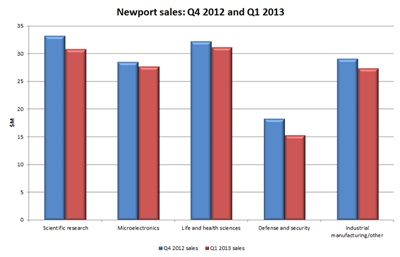 Diversified photonics company Newport has reported a decline in sales and earnings for the opening quarter of 2013, in what one stock analyst described as “a big disappointment”.

CEO Robert Phillippy revealed a double-digit sales decline in all five of the firm’s end markets compared with last year. At $132.6 million, total sales were down 16% on last year and down 6% on the closing quarter of 2012. Although the company had said previously that sales would be down sequentially, the extent of the fall came as a surprise.

That impact was perhaps most evident at the company’s lasers division Spectra-Physics, where Q1 sales of $38.9 million were fully 21% below the same period in 2012 – although the main reason for that is the currently much weaker level of demand from the semiconductor industry.

Phillippy said that while market conditions have been weak since the start of 2013, the order picture had started to look somewhat healthier - aside from the areas of defense and scientific research, where uncertainty over US federal budgets continues to have an impact.

In the biophotonics, microelectronics and industrial manufacturing sectors, the CEO is optimistic that the order upturn may turn out to be the early signs of recovery. But at $133.6 million, total Q1 2013 orders were flat with the end of 2012, and down some 28% compared with Q1 2012.

"Based on input from our customers, we expect conditions in several end markets to improve during the course of 2013, resulting in increased sales in the second half of the year,” Phillippy told investors. “In the second quarter of 2013, we expect sales to be slightly higher than the first quarter level, based on our current backlog and the anticipated market improvement.”

However, that outlook did little to impress the market, with analyst Mark Douglass from Longbow Research indicating that the “slightly higher” guidance was still well below expectations and reducing his stock price target for Newport from $19 to $16. 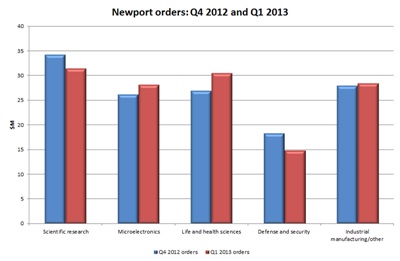 Market bottom?
On the plus side, Newport does believe that Q1 represented the bottom of the current trough in demand for its products – at a time where it is still incorporating recent major acquisitions such as Ophir Optronics – and a future uptick in sales should translate to sharply higher earnings.

At only $2.7 million, or $0.08 per share, Newport’s earnings for the quarter were down sharply, and compared badly with Douglass’ earnings forecast of $0.23 per share and a consensus estimate of $0.19.

Not surprisingly, Newport’s stock price slumped by around 10% following the results announcement.

The company also updated investors on some key strategic developments, with CFO Charles Cargile saying: “We continue to make progress in our optics manufacturing facility in Romania. This facility will be a world class, low-cost fabricating and coating location for infrared and visible optics. [It] will allow us to be more cost-competitive and also provide us with greater access to European defense and security customers.”

Meanwhile Phillippy is excited about Newport’s new “Quasar” hybrid solid-state/fiber laser. “There has been a great deal of activity in terms of customer evaluation,” said the CEO. “I think they're really excited about it, and if things go as we would anticipate, we'll start generating meaningful revenues as early as the fourth quarter of this year.”

The Quasar began shipping in small quantities in the recent quarter, and according to Newport has already demonstrated “unprecedented results” in glass cutting, PCB drilling and other micromachining applications.