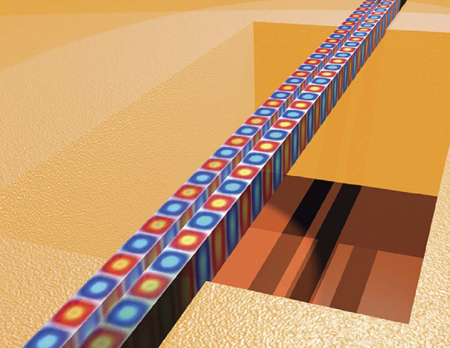 Optical techniques for high speed communications, computing and many types of data processing are increasingly well established. However, to be able to effectively employ photons in circuits and sensors, the transport and management media must have particular optical and mechanical properties.

Now researchers at the Karlsruhe Institute of Technology (KIT) have for the first time used polycrystalline diamond to manufacture optical circuits and have published their results online in Nature Communications (DOI: 10.1038/ncomms2710).

KIT research group leader Wolfram Pernice commented, “Diamond has several properties that allow us to manufacture all components needed for a ready-to-use optomechanical circuit monolithically. The elements manufactured in this way – including the resonators, circuits, and the wafer – are attractive to developers because of their high quality.”

Diamond is optically transparent to lightwaves of a wide range of wavelengths, including the visible spectrum between 400nm and 750nm. It is due to this fact that diamond is particularly useful in optomechanical circuits for applications in sensor technology and fluorescence imaging, or for novel optical biological measuring methods. Whereas the high refractive index of diamond and the absence of absorption allow an efficient photon transport, its high modulus of elasticity makes it a robust material which adapts excellently to rough surfaces and releases heat rapidly.

So far, the KIT team has manufactured optical circuits using monocrystalline diamond substrates – highly pure crystals with typically no more than one impurity atom to every one billion diamond atoms. Such circuits are bound to be small and their application to optical systems has required sophisticated fabrication methods.

Optomechanics combines integrated optics with mechanical elements, such as with nanomechanical resonators in the case of the optomechanical circuit developed by Pernice and his group. These oscillatory systems react to a certain frequency. When that frequency occurs, the resonator is excited into vibration.

Patrik Rath, lead author of this study, comments, “Nanomechanical resonators are among today’s most sensitive sensors and are used in various precision measurements. It is extremely difficult, however, to address such smallest components through conventional measuring methods.”

“In our study, we have made use of the fact that today, nanophotonic components can be manufactured in the same sizes as nanoscale mechanical resonators. When the resonator responds, corresponding optical signals are transferred directly to the circuit.” This novel development has allowed the combining of once separate fields of research and has enabled the realization of highly efficient optomechanical circuits.

The polycrystalline diamond was manufactured in cooperation with the Fraunhofer Institute for Applied Solid State Physics and the company Diamond Materials, both based in Freiburg, Germany. The prototypes, manufactured within the Integrated Quantum Photonics-project at the DFG Center for Functional Nanostructures in Karlsruhe, are said to “open up new ways for entirely optically controlled platforms that are increasingly needed in fundamental research and advanced sensor technologies”. These technologies include accelerometers that are integrated in various electronic devices such as airbag sensors or smartphone water levels.