Microsatellites turn eyes to the sky

How two Canadian-built satellites and their optical sensors are keeping tabs on asteroids and space debris.

In February, the Canadian government launched two satellites with a dual mission - to detect and track space objects while contributing to the country's continued support of 'space situational awareness' activities.

Both satellites carry optical payloads designed to survey the sky from orbit looking for objects of interest, from surveillance of so-called “space junk” and other satellites to detecting and tracking near-Earth asteroids such as the bus-sized lump of rock that slammed into Russia the same month.

The Near-Earth Object Surveillance Satellite (NEOSSat), launched just ten days after the Chelyabinsk meteor strike, is a microsatellite carrying the world’s first space telescope dedicated to detecting and tracking asteroids, satellites and space debris. Produced as part of a joint venture between Defence Research and Development Canada (DRDC) and the Canadian Space Agency (CSA), it will be used by DRDC to perform state-of-the-art research in satellite tracking.

"Space-based surveillance of asteroids is driven by the fact that the most potentially dangerous objects are usually those that orbit the sun in elliptical orbits whose semi-major axis has an apogee greater than Earth’s - which could mean that it could one day cross Earth’s orbit like the one that did a few weeks ago, but with much greater consequences," says David Cooper, the CEO of Microsat Systems Canada.

"As these asteroids orbit the sun, they can only be seen by looking towards the sun, which from Earth is very difficult as the atmosphere diffuses the sun’s light and makes detection of a faint asteroid in that bright background very difficult. It is the same reason you can’t see stars during the daytime when of course they are there. This is much, much easier from orbit, hence the desire to built NEOSSat for this purpose," he adds. 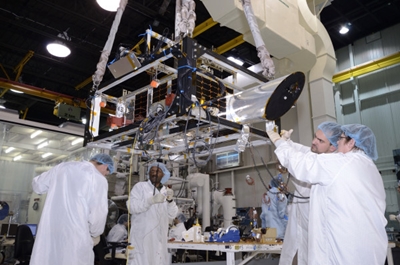 Microsatellite
While the majority of the world’s 1,000 operational satellites are large and multi-functional, NEOSSat is an example of a relatively new type of craft - a microsatellite. Designed and built in Canada, NEOSSat is the size of a large suitcase and weighs just 75 kg.

According to Brad Wallace, defence scientist at DRDC and principal investigator on the project, NEOSSat can produce single mission-based capabilities at a lower cost than traditional space missions.

"Microsatellites are an emerging technology made feasible by the ongoing miniaturization of spacecraft components and new approaches to spacecraft design and testing," says Wallace.

Attendees at SPIE’s Defense, Security and Sensing (DSS) conference in Baltimore next week will have the chance to hear more about similar projects in a dedicated conference session, including an ultra-compact hyperspectral imager for microsatellites that is scheduled to launch in September - though its eyes will be turned back towards Earth to look at volcanoes.

DRDC is interested in microsatellites as a potential platform for future DND space missions, and regards them as increasingly capable as the component technologies become smaller, lower power, and less expensive.

As a result, microsatellites have the potential to increase the accessibility of space - and Wallace says that NEOSSat was built to demonstrate and assess the capability of microsatellites to perform militarily useful missions.

NEOSSat’s on-board sensor is based on the same technology used in the Microvariability and Oscillation of STars (MOST) spacecraft, which is already in orbit. It consists of a 15 cm diameter Maksutov-Cassegrain telescope paired with two e2v 1024x1024 pixel CCDs at the focal plane.

"In front of the telescope itself is a high-performance baffle designed to reduce scattered light to a level significantly below that of the light that is scattered off interplanetary dust in the field of view," says Wallace.

The CCDs are identical, with one designated as the 'science' CCD and the second used as a star-tracker for a high-performance attitude control system (ACS). As Wallace explains, the star tracker CCD is crucial to the success of the system as brightness sensitivity and position precision requirements can only be met if the spacecraft is kept extremely steady during observations.

"The system works by simply pointing the telescope boresite to a region of the sky where you expect an object to pass," explains Wallace. "A command is sent to begin a short exposure when you expect the object to be in the field of view. The image is sent to the spacecraft main memory and then downloaded to the ground station and sent to a processing facility for analysis." 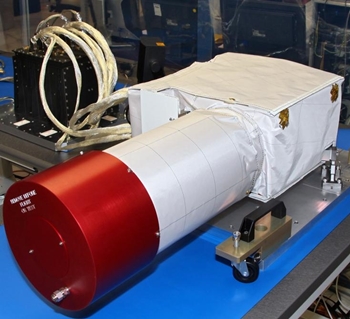 According to Brian Mackay, director of engineering and chief engineer at the design and engineering company COM DEV Canada, the payload consists of an “all-reflective” off-axis visible-band telescope coupled with a low-noise preamplifier and focal plane, and an electronics module.

Wallace explains that the telescope forms a low-distortion image on two adjacent CCDs in the focal plane, creating a primary and “redundant” image that are offset spatially.

Control of stray light allows for observation of very faint objects within the vicinity of the bright Earth 'limb' and thermal aberrations are minimized through the use of an all-aluminum construction and the use of thermal coatings.

In operation, the optical payload acquires a series of images for each target and performs on-board image pre-processing to minimize the downlink requirements. Internal calibration sources will also be used periodically to check the status of the payload and to identify, and possibly correct, any pixels with an aberrant response.

"[In addition], a ground-based sensor is limited to observations of objects that appear in its ‘sky’, but can never see the objects that are on the other side of the Earth. A space-based sensor can see all geostationary objects no matter where they are," he says.

Looking ahead, Wallace predicts an ongoing requirement for increased capability as the number of objects in orbit increases, although the total number of sensors required will remain modest.

"The optical sensors that we do use, however, will likely have to be very capable.” he says. “The amount of debris objects increases as we look at smaller and fainter objects, so we are likely to need telescopes that are a few meters in diameter, have wide fields of view, and which are highly agile to observe many objects in a single night.”

While these two latest microsatellites will largely benefit the Canadian authorities, Mackay points out that the importance of tracking of such objects is becoming recognized elsewhere:

"It is also of growing importance to satellite service providers and operators around the world," he says. “We anticipate that Canada, the US, and the European Union will all continue to invest in systems and capabilities to enable them to detect and track threats to critical space infrastructure such as satellites and the International Space Station.”