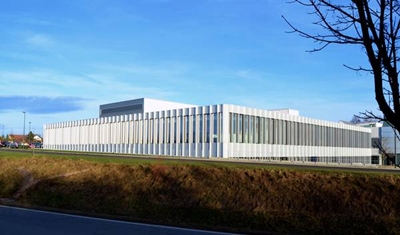 The two-storey center was officially dedicated at a ceremony held on March 6, with the Mayor of Schramberg Thomas Herzog, company president Nicola Leibinger-Kammüller, vice chairman Peter Leibinger and Fraunhofer Institute for Laser Technology director Reinhart Poprawe among the 250 guests in attendance.

The 6200 m2 site houses both office space and laboratories dedicated to the development of solid-state lasers, with all development activity now consolidated under a single roof rather than scattered around the Black Forest site.

According to Trumpf, the floorspace freed up will now be used to expand laser production capacity, while the new development center could itself be expanded easily in the future by adding a third storey to the building.

“The application options for laser technology are by no means exhausted,” said Leibinger at the opening ceremony. “And Schramberg will continue to play a superior part in ensuring that Germany continues to hold a top position, all around the world, in the field of industrial lasers.”

“Schramberg is not only the cradle of the German laser industry,” he added. “Today it is one of the world’s leaders in laser technology development and production.”

Poprawe said: “The laser is playing a decisive role in the design of tomorrow’s production technologies. And to that end we need – in addition to a superior research setting at universities and other institutions – highly innovative companies like Trumpf.”

The new center features a series laser-cut aluminum fins that run the entire height of the building. Laser testing takes place on a lower level that is largely embedded into a slope, with offices on the upper floor.

Following completion of the development center, Trumpf says that an addition to its shipping unit is now at planning stage. The company’s various solid-state lasers, which include disk sources, are used in a wide variety of applications from semiconductor manufacturing to automobile production – with BMW recently investing heavily in 4 kW disk lasers to make parts for its Mini car in Swindon, UK.

At the recent SPIE Photonics West event, Trumpf showed off the latest model in its "TruDisk" series of lasers, which delivers 6 kW from a single disk and is said to cut operating costs by as much as one-fifth compared with other lasers.