Market for the ultra-broadband sources and related technology estimated at $50 million, with microscopy a key application. 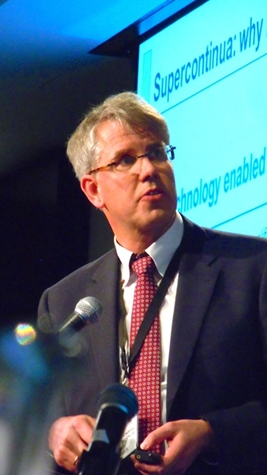 by Matthew Peach and Mike Hatcher
After transitioning from a laboratory curiosity to a genuine commercial tool in recent years, supercontinuum sources have emerged to create a fledgling marketplace. The point was one of several made by Wilhelm Kaenders, co-founder and co-president of Toptica Photonics, at the Lasers & Photonics Marketplace Seminar in San Francisco last week.

Kaenders and his company have helped drive both the development and commercialization of supercontinuum sources, along with the likes of UK-based Fianium, Denmark’s NKT Photonics and French firm Leukos, as well as Berlin-headquartered Picoquant and Newport subsidiary Spectra-Physics. His shorthand description of such devices is: “broad as a lamp, bright as a laser.”

He expanded: “In the supercontinuum case, nonlinearities in an ultrafast fiber laser are your friend, rather than your enemy – because they result in the broad spectrum of white light produced by supercontinuum.”

A supercontinuum source typically has the following technical features: simultaneous spectral output, over typically more than one optical octave of bandwidth; a continuous, tunable and bright spectrum; and a low temporal coherence – making the output suitable for OCT applications and high spatial coherence.

Microscopy applications
Turning to applications, Kaenders said, “These sources and associated devices are becoming more important in the biological imaging market – for functions such as linear and nonlinear fluorescence microscopy, ophthalmology, flow cytometry, to name a few. If you integrate a supercontinuum laser with a tunable filter you can have a highly versatile, bright tunable source for microscopy.” 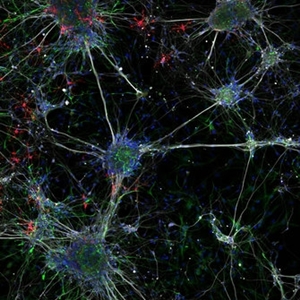 Described as a “white light laser (WLL)” by Leica, the source provides custom selection of wavelengths with multiple laser lines. “Now in its second generation, the WLL can serve as a FLIM source,” states the firm in the product literature for the “TCS SP8 X” version of the instrument.

“The WLL source of the TCS SP8 X perfectly matches the wavelength of any fluorophore. Up to eight excitation lines can be used simultaneously,” it boasts. “By tuning both excitation and detection, complete excitation emission spectra can be acquired. With this spectral information, any dye can be optimally excited with minimum cross-excitation and specimen damage.”

For the FLIM technique, the WLL provides information about the direct environment of a molecule, like local pH conditions, or binding to another molecule – and as a result Leica’s instrument is capable of some truly extraordinary images.

In that setup, the patented acousto-optical beam splitter (AOBS) is the key to selecting any wavelength from the white spectrum, Leica explains. “Completed by the tunable spectral detector, the Leica TCS SP8 X represents the only filter-free versatile confocal microscope,” it claims.

Frequency combs with 300 kHz individual comb lines are possible. Broadband interference is another effect, which can be exploited to form a spatial or temporal meter. Simplicity is another advantage for supercontinuum-generated combs, replacing the previously room-sized setups with just a small box.

Quantifying the size of the market for supercontinuum technologies at this point remains a big challenge, but Kaenders estimates it to be worth at least $50 million - comprising approximately $25 million for the sources themselves, $15 million for imaging applications, $7 million for general laboratory tools, and at least $3 million relating to the photonic crystal fiber (PCF) needed to produce the tunable white light, and other accessories.

However, the Toptica co-founder also highlighted a number of market roadblocks and potential threats – for example that NKT currently dominates as virtually the only provider of PCF, and the move by Lecia to patent the use of PCF for microscopy applications.

In addition, there remains the problem that the technology’s significant complexity and still relatively small volumes inevitably translates to a high cost.

Even so, Kaenders concluded that there is still room for the market to grow, and that supercontinuum systems had the potential to create sales in excess of $150 million per year.

With plenty of continued scientific interest in the fundamentals of supercontinua and their applications, he also believes that such work would undoubtedly “lead to more surprises”.