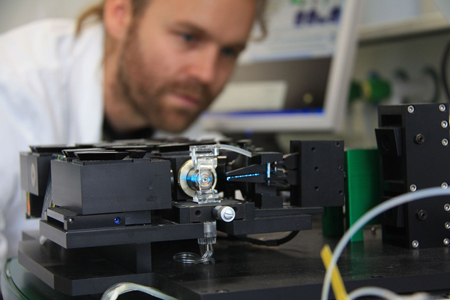 Bugs in the system? Flowcytometry analysis of tap water by laser.

Laser-based flow cytometry (see description below) can now be officially used for the quantification of microbial cells in drinking water.

The novel analytical method – developed at Swiss water research center Eawag and extensively tested both in Switzerland and abroad – has been incorporated into the Swiss Food Compendium by the Federal Office of Public Health (FoPH).

Its developers say the adapted technique "provides much more realistic results" than the conventional method, in which bacterial colonies are grown on agar plates. The results demonstrate that even good-quality drinking water harbours 100 to 10,000 times more living cells than the conventional plate count method would suggest.

For over 100 years, the means used to assess the microbiological safety of drinking water remained largely unchanged: bacteria present in water are sampled then grown on solid nutrient media, and the colonies then counted.

The intestinal bacteria Escherichia coli (e-coli) and enterococci serve as indicators of faecal contamination. At the same time, the heterotrophic plate count (HPC) is determined as a measure of general microbiological quality. This method quantifies all the microorganisms present which can reproduce at temperatures of around 20–45°C (mesophilic). According to the global standard, the number of colonies formed should not exceed 300 per millilitre.

The conventional cultivation-based method has two major drawbacks: it is time-consuming – results are only available after 3–10 days in the case of the HPC – and only a fraction of the living cells actually present in samples are counted. This is because the method only detects those bacteria which can grow and form colonies under the specified conditions, which is generally 0.01–1% of the total.

Thus, the limit of 300 colony-forming units per millilitre (CFU/mL) also specified in the Swiss Ordinance on Food Hygiene (HyV) is based on a significant underestimate of the actual number of microorganisms present. The cultivation of E. coli and enterococci does, however, normally yield reliable results.

The Swiss FoPH incorporated the new method, known as "No. 333 - Determining the total cell count and ratios of high and low nucleic acid content cells in freshwater using flow cytometry” into the Swiss Food Compendium as a recommended test method. Replacing the HPC - which is no longer considered by the Swiss to be relevant for food hygiene purposes - FCM can now determine the total cell count in a water sample within a matter of minutes.

Eawag says the new count method provides a realistic indication of the microbial content of water and allows conclusions to be drawn about contamination. In addition, with the same method, the ratio of larger to smaller cells can also be determined. This is seen by experts as the “fingerprint” of drinking water: sudden changes in this value may indicate, for example, damage or misconnections in the water distribution network, or faults in water treatment. 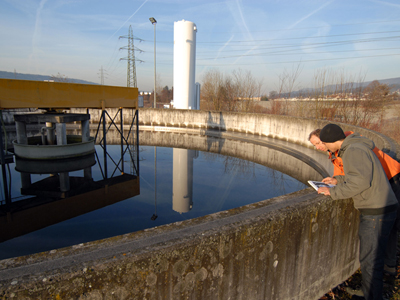 Switzerland is the first country worldwide to have adopted this advanced method for the quantification of microbial cells in water. Eawag drinking water specialist Stefan Koetzsch believes that other countries, such as the Netherlands, will follow soon. Given the much higher total cell counts, should the federal authorities now specify new limits?

“No,” says Koetzsch, “that would not be appropriate; nor would it really be possible since the microbiological composition of water will depend on its particular origin, and high cell counts do not in themselves provide conclusive evidence of possible pathogens” (see Fig. 1).

However, Koetzsch and his colleagues are convinced that FCM will become established as a new standard in the monitoring of drinking water. The method is ideally suited for monitoring an entire supply system (from drinking water abstraction through treatment and distribution to consumers), optimizing processes and identifying problems. Efforts are already underway to develop an automated version of the method, which would permit “online” monitoring of bacterial cell counts.

Flow cytometry was developed for applications in the field of medicine, where it has been used since the 1980s, such as for counting relatively large blood cells. When this method is employed for drinking water analysis, the generally small cells contained in a sample are first stained with fluorescent dyes, which bind to DNA.

The cells are then passed in single file through a glass capillary, where they are exposed to a beam of light from a laser. The resultant scatter and fluorescence signals are picked up by detectors, and analytical software is used to classify each individual particle.

Before the flow cytometry method could be applied for water analysis in day-to-day practice, it had to undergo rigorous testing. Financial support for this standardization and validation was provided by the Commission for Technology and Innovation and the Swiss Gas and Water Industry Association. A total of 24 partners from academia, administration and public/private laboratories have participated in this process.