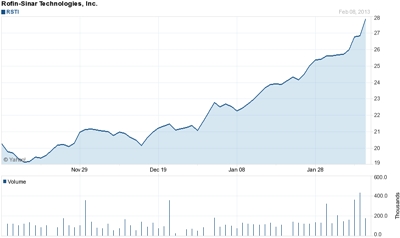 On the up: Rofin's stock rises 45% in three months

Rofin-Sinar, the transatlantic industrial laser company with headquarters in both Michigan and Hamburg, Germany, had mixed news for investors in results for its first quarter of fiscal 2013.

The good news was that sales went up 8% compared with the same period last year, and that stronger sales of both carbon dioxide and fiber lasers is expected for the rest of 2013. For the full fiscal year, Rofin forecast sales to hit a mark somewhere between $550 million and $560 million – up on the prior guidance range of $535 million-$545 million.

But that was counterbalanced by news of another delay in the roll-out of higher-power diode pump packages, which are required to cut the cost of kilowatt-scale fiber lasers in what is already a highly competitive market – with that competition only set to increase as rivals introduce other high-power 1 micron lasers, including potentially much cheaper direct-diode systems.

MBE capacity constrained
Originally, the company’s new 200 W packages had been scheduled to replace existing 135 W versions by the end of calendar 2012. But with delays partly related to capacity constraints with a third-party supplier’s molecular beam epitaxy (MBE) reactors, the new packages will now be going into production later this quarter – with a full replacement scheduled for the summer.

Despite the delay, Rofin’s CEO Günther Braun remains confident of tripling the company’s sales of high-power fiber lasers this fiscal year to approximately 300 units, although the impact of that delay will weigh on the company’s profit margins in the meantime.

In the latest quarter, Rofin's fiber laser sales doubled year-on-year to $22.3 million (383 units). Braun said that half of the company's $29.4 million fiber laser backlog was now represented by high-power sources, in terms of dollar value.

Rival IPG Photonics continues to dominate in high-power fiber lasers, with its own CEO Valentin Gapontsev claiming a market share of 80% in the sector at last week’s Lasers and Photonics Marketplace Seminar, held in San Francisco in conjunction with the SPIE Photonics West event.

Stock up 45% in three months
If analysts and investors were understandably disappointed by the delay, they also reacted positively to a more upbeat assessment of market demand than of late, and Rofin’s stock rose steadily following the earnings call to reach close to $28.

That consolidated consistent gains made by the stock over the past quarter, during which time Rofin’s value has risen by some 45%. Longbow Research equity analyst Mark Douglass raised his 12-month price target for Rofin from $28 to $31 following the update, writing in a research note: "If it can execute and the macro [environment] continues to improve, we think there’s substantial upside to earnings and the share price."

Summing up the situation in an investor conference call, Braun said: “We have experienced robust demand from the machine tool, automotive and medical device industries. Once again the consumer electronics industry contributed increased revenues, whereas the semiconductor industry, as expected, was hushed.”

Sales in the latest quarter were boosted by around $5 million thanks to a major Chinese solar customer’s acceptance of Rofin’s lasers, prompting the CEO to say that he saw a positive outlook in what is otherwise proving to be a nuclear winter for suppliers of capital equipment to the embattled photovoltaics industry.

Fiber laser market CAGR
Questioned by investors, Braun also suggested that the wider market for fiber lasers should grow in the region of 10% in calendar 2013. That compares with a more bullish long-term forecast given during a talk by IPG’s CFO Tim Mammen in a technical session at last week’s Photonics West event.

Mammen said that he was expecting the fiber laser sub-sector to grow at a compound annual rate of more than 20% over the next few years, as conventional materials processing technologies were increasingly displaced.

Like Braun, Mammen highlighted growing applications outside of the usual cutting and welding fields, for example in cladding. Mammen also suggested that aircraft paint stripping and even laser-assisted drilling of oil wells - where the laser is used to soften rock and reduce drill-bit wear and tear - represented significant opportunities.

Overall, Rofin sold 1392 laser units in the latest quarter, representing a 31% increase on the same quarter a year ago – highlighting both the strong growth in demand and price pressure in the market currently.