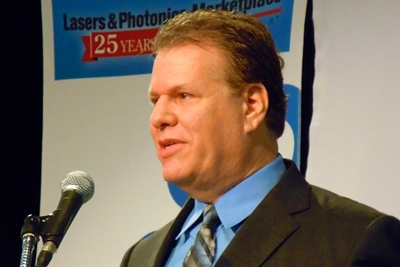 by Matthew Peach in San Francisco
Growth in global sales of lasers and laser systems this year will range from flat to only a modest improvement of a few percentage points, according to analyst Allen Nogee from Strategies Unlimited.

Nogee and David Belforte (editor in chief of the industry publication Industrial Laser Solutions), opened proceedings at the 25th Lasers & Photonics Marketplace Seminar, which took place on February 4 in San Francisco to coincide with the SPIE Photonics West convention.

Nogee described the laser market as “incredible” – though that was more a reflection of an ever-widening variety of applications than anything else. “Besides all of the usual industrial applications, today’s lasers are also busy distracting missiles, removing people’s wrinkles and even helping to grow hair,” he said.

The senior analyst’s headline figure of a 3% improvement in sales in 2013 would take global laser sales to almost $9 billion. And compound growth over the following three years should see that figure rise to $10 billion by 2016.

But for this year, Nogee offered a mix of good and bad news: “Growth in emerging economies will be offset by slowing growth in China; falling unemployment counterbalanced by public debt crises; and cheaper US exports but more expensive imports,” he said.

In that respect, the laser business will likely reflect the wider macroeconomic picture, where the consensus is for US growth of around 2.5%, European growth of 1.3%, while China slows but in relative terms steams ahead at a rate of 8%.

EUV poser
Nogee posed a variety of laser-related questions about developments that would heavily influence the fortunes of certain sectors this year. Among them: would extreme ultraviolet (EUV) lithography finally break through? Would wireless technologies continue to drive communications growth? Would heat-assisted magnetic recording (HAMR) data storage technology begin to make an impact? Are pico-projectors really an opportunity when they generate no revenues for mobile service providers? And how would the “Obamacare” 2.3% medical device tax impact sales?

Following Nogee, Belforte considered what 2013 held in store for the industrial laser market specifically. He told the 150-strong audience: “North American manufacturers continue to exceed expectations and even fiscal restraints are not slowing US exports. However, Europe remains a problem and growth in central Europe is slowing.

“On the positive side, Asia is returning to growth mode, China is opening the door for capital equipment imports despite government policies aimed at building self-reliance. Japan’s economy reverse effects will not show until the second half of 2013.”

He continued: “South-east Asia is growing its share of the market although South Korea will be slow to return to export prominence. The rest of the world will start to open up as the year progresses and although the BRIC markets failed to boost their share in 2012, a positive change is expected in those markets in 2013.”

Belforte detailed what he describes as “markets of opportunity” for the different types of laser applications: transportation and aerospace (car and aircraft production are generally on the up); energy (wind turbines are in demand); medical devices (stents); agriculture (with its machinery demand growing at about 7%); communications (smart phone manufacture); and metals and materials processing using more lasers.

Considering prospects for 2013, Belforte agreed with Nogee that there would be slow activity in the first half with markets picking up in the fourth quarter to finish the year with a slight increase.

“Laser application drivers in key manufacturing sectors have strong near-term growth prospects, overcoming some of the global economic situations,” he concluded. “The indications are that 2014 will bring a return to stronger revenue growth for lasers as economies stabilize and recover.”