But problems with the vision chip’s hermetic seal means some patients have had their implant removed. 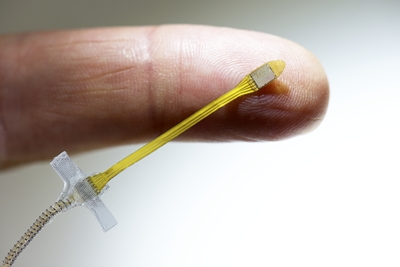 Results from the first stage of a multi-center clinical trial have shown that a retinal implant can restore “useful vision in daily life” to patients blinded by the condition retinitis pigmentosa.

Nine patients received the 1500-photodiode “vision chip” developed by Germany-based Retina Implant known as “Alpha-IMS”. The trial of four women and five men showed that the wirelessly controlled device, implanted below the fovea (the high-resolution center of the retina) could restore vision useful for daily life in the majority of the patients tested.

Some of the remarkable experiences subsequently reported by patients and documented in a paper published in the journal Proceedings of The Royal Society B included:

In addition, one patient reported being able to read letters on the signs of restaurants and storefronts, while others described being able to see car lights stopping and moving at night, the stalk of a sunflower, and a goose swimming in a particular direction.

Exceeding expectations; stability issues
“The results of our first human clinical trial exceeded our expectations, and we are further encouraged by the results from the second human trial,” commented Eberhart Zrenner, M.D., lead clinical trial investigator at the Institute for Ophthalmologic Research at University Eye Hospital Tuebingen, Germany, in a statement from Retina Implant. 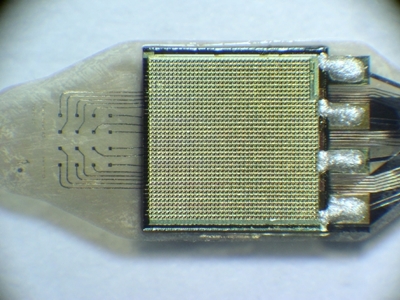 “As physicians, we are constantly seeking out the best treatment options for our most in-need patients, which most definitely includes those suffering from advanced-stage retinitis pigmentosa. This research provides additional evidence that our subretinal implant technology can help some patients with retinal degeneration regain functional vision, and does so in a way that does not require externally visible equipment.”

While the results of the first phase of the latest trial – it has now moved into the multi-center phase in the UK, Hong Kong, Hungary and elsewhere – are undoubtedly encouraging, the study did report some stability problems with the 3mm x 3mm vision chip.

For example, in three patients it was found that eye movements had caused a cable to break in the device, which failed after between three and nine months as a result. That issue has since been solved by changing both the cable design and the surgical procedure used, while a second problem resulted from the quality of the chip’s hermetic seal.

According to supplementary material published alongside the main journal article, in another three patients the periphery of the Alpha-IMS chip appeared corroded after around nine months. As a result, the chip gradually failed and the patients chose to have the implant removed.

Treatment options
The team has now moved forward to the multi-center stage of the trial, and the company is hoping to gain regulatory approval of the chip as a genuine treatment option. Walter-G Wrobel, the CEO of Retina Implant, said:

“The continuation of our trial and publication of this module is the next milestone in our quest to secure CE mark approval and provide retinitis pigmentosa patients living in darkness with a treatment option. We are continually humbled by the 36 patients we’ve implanted thus far and their willingness to participate in this ground-breaking research.”

Alpha IMS is not the only optoelectronic device being tested for its ability to restore sight to those blinded by retinitis pigmentosa. The “Argus II” retinal prosthesis, developed by US-based Second Sight Medical Products, last week received market approval from the US Food & Drug Administration (FDA).

At the SPIE Photonics West BiOS conference earlier this month, investigators reported that patients implanted with the Argus II were able to distinguish between light- and dark-colored socks, while a video of one subject showed them able to walk down the street and stop when another pedestrian crossed their path.

According to the researchers, 20 of the 26 patients in the latest Argus II study showed an improved quality of life – as defined by official FDA metrics – while the remaining six were shown to have a stimulated neural response.

Commenting on the FDA decision, Second Sight's CEO Robert Greenberg said: “With this approval, we look forward to building a strong surgical network in the United States and recruiting new hospitals that will offer the Argus II retinal implant. This is a game changer in sight-affecting diseases, that represents a huge step forward for the field and for these patients who were without any available treatment options until now.”

Following the FDA nod, the Argus II is slated to be available later this year in clinical centers across the US.